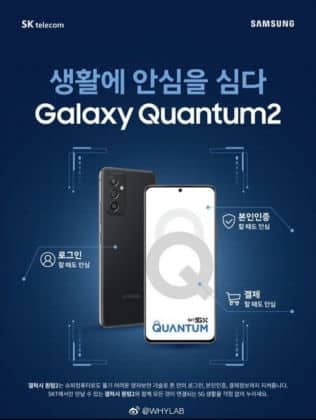 The reports say that the Samsung Galaxy Quantum2 will be flaunting a 6.7-inch Super AMOLED FHD+ display and have a high refresh rate of 120 Hz. The smartphone is expected to be powered by Qualcomm Snapdragon 855+ mobile processor. It can couples up to 8 GB RAM and 128 GB of internal storage. To expand the storage, you might see an external microSD slot.

The Galaxy Quantum2 will be sold by SK Telecom. They also had the duty to sell the previous version of this series. In the images leaked, we can spot a selfie camera at the center of the device and has moderately sized bezels. Also, it will have an in-display fingerprint scanner. The rear cameras are placed in a rectangle-shaped module and have three camera sensor along with an LED flash.

The main rear camera is touted to be a 64 MP sensor with optical image stabilization. The other features of the camera are still not known. The device is said to draw energy from a 4500mAh battery and will be paired with a 25W fast charging support. Another source claims that Samsung will offer a 15W charger. It might be available in Black and White colour models only.

You will be eligible to get complimentary gifts if you pre-order the Galaxy Quantum2. The gifts include a free pair of Galaxy Buds Live and a clear TPU case. Not everything is known about this smartphone but we will get the information very soon as the launch is supposed to be on 23rd April 2021.

US Administration Officials to listen to Companies Competing for Scarce Chips

Samsung Galaxy Quantum2(Galaxy A82 5G): All the Details and Specifications