Arsenal looking at Achraf Hakimi as a replacement for Hector Bellerin 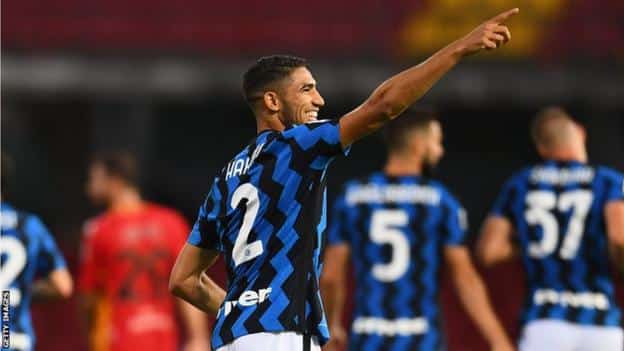 Inter Milan’s Achraf Hakim is being linked as a potential target for Arsenal this summer to replace their first choice, Hector Bellerin, should he leave the club. The Spaniard has been linked with a move away time and time again, with Paris Saint-Germain the interested party in his services.

Paris had to let go of Thomas Meunier as a free agent last summer, and the Belgian joined Borussia Dortmund. Former Roma right-back Alessandro Florenzi was signed on loan in the summer of 2020 to replace Meunier, and the Italian’s loan deal expires at the end of the ongoing campaign.

Hence, it is only rational that PSG look for a long term commitment in terms of the position for Mauricio Pochettino to plan the team out properly. Bellerin has been singled out as the top candidate for the Parisians to fill in the position.

While it is unclear as to how interested Arsenal are in Achraf Hakimi’s signature, it will be an expensive deal for the Gunners since he joined Inter only a season ago from Real Madrid, ending a two year loan spell with Borussia Dortmund to join Antonio Conte at the San Siro, entering a system that fits his role perfectly.

Recognising his value, Inter Milan have placed a €50 million price tag on the player and considering the dire financial situation across the continent, the deal will be a difficult one for the London club. All that said, the prospect of the transfer only stands if Hector Bellerin leaves the club.