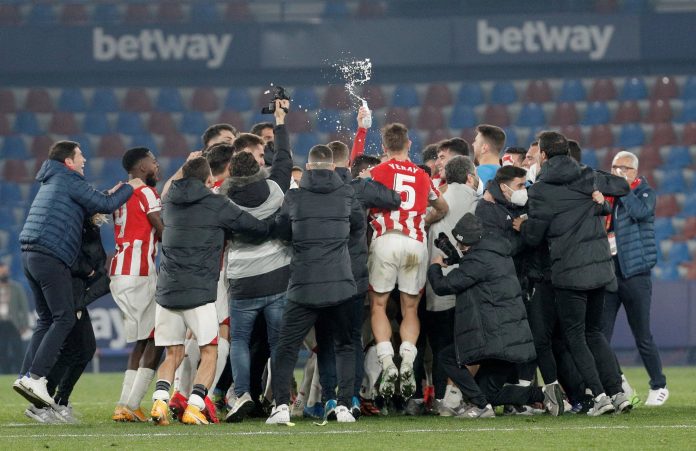 Ahead of the finals of the Copa del Rey between rivals Real Sociedad and Athletic Bilbao, fans of both clubs went on to the streets to see off their teams for the journey to Seville, participating in a blatant violation of the coronavirus rules preventing the gathering of people.

Bilbao fans were more violent during their gatherings as they clashed with the police ahead of the finals, with things taking an ugly turn when a fan set a container on the street on fire. This further resulted in people throwing their drink bottles into the container to add to the blaze.

One video sees a Bilbao fan leap from the top of a lamp post and crashes straight onto the road. He then gets up, apparently not seriously injured, and continues reveling with his fellow fans.

Local police were forced to intervene with the growing masses, who had gathered close to Athletic’s San Memes stadium. Several were pelted with bottles and other missiles.

Fans were without face masks and clearly did not maintain any distance between themselves.

Bilbao went on to taste defeat in the delayed Copa del Rey finals of last year, missing out on the first of potentially two successive Spanish Cup victories. Sociedad captain Mikel Oyarzabal was the only goalscorer of the game, netting home from the penalty spot to put his team ahead.