How is a Chip Shortage Causing Turmoil in Industries ranging from Car to Computers?

A 20th Century invention, the lowly chip, has taken a leap from a little-understood workhorse in powerful computers to one of the most crucial and expensive components under the hood of modern-day electronic works.

That explosion in demand—unexpectedly boomed during the pandemic-inflicted year of 2020 for certain industries like smartphones and PCs—has caused a near-term supply shock triggering an unprecedented global shortage.

In February, lead times—“the duration between when an order for a chip is placed and when it actually gets filled”—stretched to 15 weeks on average. Since data collection started in 2017, this has happened for the first time, according to industry distributor data from Susquehanna Financial Group. Lead time for Broadcom Inc.—a barometer for the industry because of its involvement across the supply chain—was 12.2 weeks in February 2020 and has now risen to 22.2 weeks.

Lead times for chips surpassed their 2018 peak in February 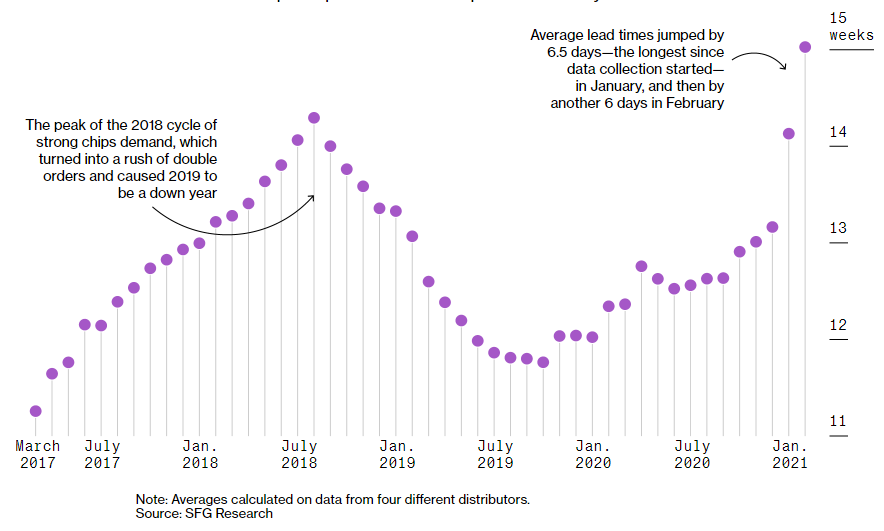 The supply crunch has taken its toll on big companies and politicians. It’s also catapulted Taiwan Semiconductor Manufacturing Co. (TSMC) and Samsung Electronics Co., Asia’s two largest chipmakers, to the top of investor and government agendas. They are responsible for making the vast majority of the world’s most advanced silicon and still do not possess the capacity to fulfill all demands. It’s a bottleneck that could last several quarters—or into next year.

Alarm bells are ringing. Samsung flagged a “serious imbalance” globally, the largest company so far to warn of fallout from the crunch. Hock Tan, Broadcom CEO, said his company is sold out this year, and customers were “willing to book out for delivery of those products out through the rest of 2021.” And on Friday, the Chinese EV company sometimes compared with Tesla, Nio Inc., became the first high-profile automaker of China to suspend production because of shortages.

A Pandemic that Reshaped Demand

Semiconductors ranging from basic microcontrollers and memory chips to the most sophisticated high-performance processors have seen a growth in overall demand over the past decade, as smartphone usage and computing power boomed. A steady rise in semiconductor sales faltered in 2019 but in 2020 was then boosted 5.4% due to the work-from-home culture demanding for home gadgets, IDC data shows.

At the same time, once largely mechanical machines like cars are becoming smarter and smarter with features even like autopilot coming into the market, entailing the use of many more chips. According to a Deloitte report, an estimated 45% of a car’s manufacturing cost by 2030 will be borne by automotive electronics, which may include everything from displays to in-car systems. The cost of the semiconductor-based components used in those electronics is estimated to jump from $475 in 2020 to $600 by 2030.

From Horsepower to Chip Power

Modern cars are relying more on electronics that include semiconductors

Industry experts believe an imbalance is particularly apparent in the so-called 200-millimeter wafers, which aid lower-end chip manufacturing. Those include power management chips and display ICs (or integrated circuits), required in a wide range of sectors but are in short supply at the moment.

Ordering during the uncertainties caused by the pandemic also led to sharp swings, which in turn muddied the waters for chipmakers trying to match capacity with demand.

Because of poor inventory planning, the carmakers got hit first as the industry underestimated vehicle consumption and thus the number of chips they needed when the pandemic hit. In 2021 alone, they are now expected to miss out on $61 billion of sales.

What has also increased exponentially this decade and magnifies the problem further is the cost of chipmaking and keeping pace with technology advancements has —making the business of manufacturing semiconductors a rarefied field for the deepest of pockets. As an illustration, provided by Bloomberg, “TSMC raised its envisioned capital expenditure for 2021 by as much as 63% to $28 billion, while Samsung is earmarking about $116 billion on a decade-long project to catch its Taiwanese arch-rival.”

Logic chips from Qualcomm, Nvidia, or Apple are the most complex and expensive pieces of silicon these days. They give computers and smartphones their intelligence. But these “fabless” companies design the semiconductors while manufacturing takes place at advanced factories called foundries.

This is another key bottleneck as just three or four foundries now account for most global chip fabrication— the obvious names are TSMC and Samsung and their more distant rivals, California-based Globalfoundries Inc., and Taiwanese company, United Microelectronics Corp.

Intel Corp. might provide the U.S. the opportunity to regain chip independence as the company last week unveiled a $20 billion plan to set up its own foundry business. “Intel, the largest chipmaker by revenue, designs and manufactures its own chips, but this expansion would enable it to produce chips for other companies as well.”

An estimated 91% of the contract chipmaking business is housed within Asia; a huge chunk is divided between just two regions: Taiwan and South Korea, home to TSMC and Samsung, respectively.

TSMC, in terms of sheer scale, sophistication and reach, is a leader of Asia and the world, cranking out millions of wafers every year for marquee clients in just about every industry imaginable. The Taiwanese chipmaker’s total wafer shipments in 2020 were 12.4 million 12-inch equivalent wafers, up from 10.1 million in 2019. TSMC has spent more than three decades perfecting its chipmaking craft and billions of dollars in past years to ensure it remains at the forefront of technology.

According to Bloomberg supply-chain estimates, “25% of all TSMC’s business comes from Apple, the highest-profile client it directly manufactures chips for.”

TSMC manufactures chips for other chipmakers or for fabless chip designers, such as Qualcomm, Broadcom, Nvidia, AMD, or Texas Instruments. These companies in turn supply the world’s biggest consumer electronics, auto parts companies, and communications equipment.

Other parts of the supply chain can create a bottleneck, too. ASML Holding NV, a Dutch company, “has a virtual monopoly on advanced photolithography equipment required to print patterns of cutting-edge chips onto the wafer.”

Japanese companies like Shin-Etsu Chemical Co., “dominate the market for chemicals used in semiconductor manufacturing.” And the manufacturing process cannot begin in the first place “without access to electronic design automation software, a segment led by the U.S.’s Cadence Design Systems Inc. and Synopsys Inc.”

“Grudge”: Netflix has dropped the trailer of the Crime Drama film

Deal: Apple AirPods deals on Amazon you shouldn’t miss out

Here’s some leaked information from Call of Duty: Vanguard about what the game has in stores for us

“The Last Kingdom(Season 5)”: All the Latest Filming updates and Release Date

FIFA 22: EA Sports reveal the official ratings of the 4 new ICONs introduced into the game

FIFA 22: Indian National Football Team is among the 17 countries which have been removed from the game

ABOUT US
The ultimate Technology & Sports news website, TechnoSports caters to the latest news for all its readers round the globe.
Contact us: [email protected]
FOLLOW US
© 2020 TechnoSports Media Group
We use cookies on our website to give you the most relevant experience by remembering your preferences and repeat visits. By clicking “Accept”, you consent to the use of ALL the cookies.
Do not sell my personal information.
Cookie SettingsAccept
Manage consent

This website uses cookies to improve your experience while you navigate through the website. Out of these, the cookies that are categorized as necessary are stored on your browser as they are essential for the working of basic functionalities of the website. We also use third-party cookies that help us analyze and understand how you use this website. These cookies will be stored in your browser only with your consent. You also have the option to opt-out of these cookies. But opting out of some of these cookies may affect your browsing experience.
Necessary Always Enabled
Necessary cookies are absolutely essential for the website to function properly. These cookies ensure basic functionalities and security features of the website, anonymously.
Functional
Functional cookies help to perform certain functionalities like sharing the content of the website on social media platforms, collect feedbacks, and other third-party features.
Performance
Performance cookies are used to understand and analyze the key performance indexes of the website which helps in delivering a better user experience for the visitors.
Analytics
Analytical cookies are used to understand how visitors interact with the website. These cookies help provide information on metrics the number of visitors, bounce rate, traffic source, etc.
Advertisement
Advertisement cookies are used to provide visitors with relevant ads and marketing campaigns. These cookies track visitors across websites and collect information to provide customized ads.
Others
Other uncategorized cookies are those that are being analyzed and have not been classified into a category as yet.
SAVE & ACCEPT

Please add yourdomain.com to your ad blocking whitelist or disable your adblocking software.