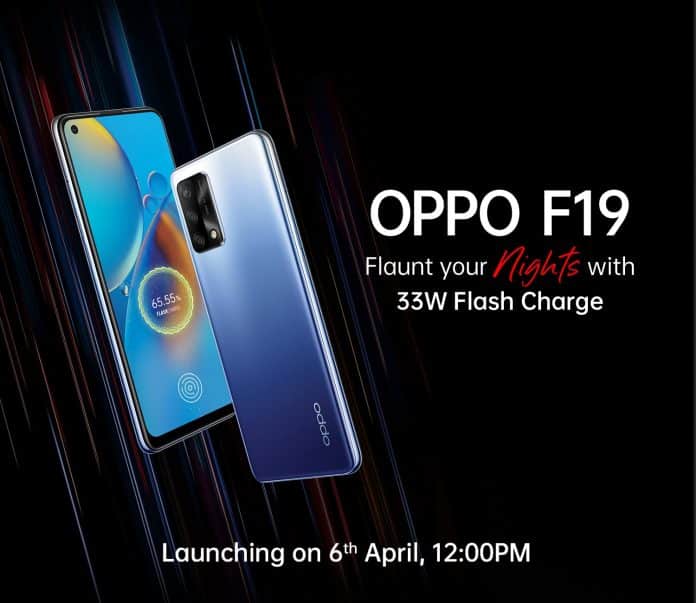 Oppo had already announced the Oppo F19 Pro and Oppo F19 Pro+ 5G in India last month. The series did not come with the vanilla version, but yesterday the company has announced the launch date of the Oppo F19 on April 6 at 12PM. The phone will be launched in India and will be available via Amazon India. Oppo India will be hosting the event with Zakir Khan, the famous stand-up comedian.

The phone will have a triple rear camera setup at the back and as the company mentions it will come with a 33W Flash Charge. As the phone has the fast charging capacity, so it is indeed coming with a 5,000mAh battery and there will be an in-display fingerprint scanner.

The phone has a punch-hole camera at the top left corner of the FHD+ AMOLED display. It has the SIM tray at the left side of the phone body and the most important part is its camera, where we get a 48MP primary sensor at the back.

The Oppo F19 will have a Snapdragon 662 SoC paired with 6GB LPDDR4X RAM and 128GB internal storage. All thanks to the Oppo Nepal listing, now we can know more about this device. The listing also mentions it will have a 16MP front-facing camera sensor and we will get a dedicated micro-SD card slot along with Bluetooth 5.0, a 3.5mm audio jack, and a USB Type-C charging port for Flash charge. The phone weighs 175grams and will be available in Black/Blue colours in India.

Share
Facebook
Twitter
Pinterest
WhatsApp
Linkedin
Previous articleOnePlus Nord SE live image along with the box: The Reality that meets a Dead End
Next articleboAt Airdopes 621 vs Noise Buds Play: Which one is the best at Rs.2,999?