Shameful loss for India against UAE 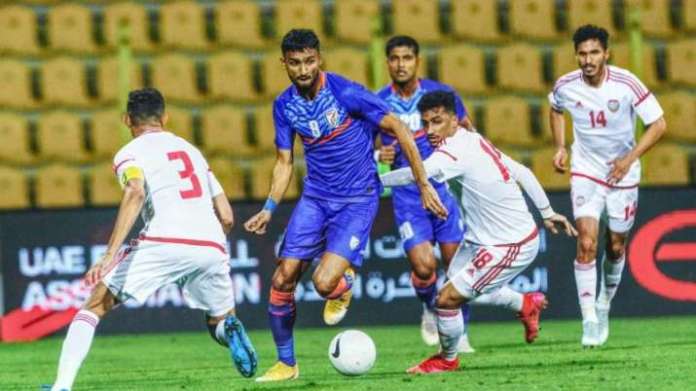 A day of shame for the Indian football team. The Blue Tigers were beaten by 6-0 against the United Arab Emirates in a friendly match.

After an impressive 1-1 draw against Oman, it is expected that Team India will give a tough fight to the mighty United Arab Emirates. But they failed to do so.

UAE took the lead in the 12th minute of the game. Ali Mabkhout breaks the deadlock for UAE. He completed his hat-trick with a 32nd-minute penalty and a 60th-minute goal. Later they increased their lead with goals from Khalil Ibrahim, Fabio Virginio de Lima, and Sebastian Tagliabue.

After this loss, it has already started to increase the question on the ability of the Indian team coach Igor Stimac. India has played 12 games under Igor Stimac and won only 1. They are now 10 games without a win. Some fans want him to be sacked as soon as possible.

UAE is 74th in the FIFA ranking, and India is in 104th. UAE was a tough opponent. But this result was fully unexpected from the Indian side. However, it was a reality check for the Indian side before the upcoming World Cup qualifiers. Players can surely learn from their mistakes and come back as better individual.

Share
Facebook
Twitter
Pinterest
WhatsApp
Linkedin
Previous articleXiaomi introduces its version of AirPower, Wireless Charging Pad that can charge three devices at once
Next articleLiverpool, Tottenham and Manchester United in the race for Marcel Sabitzer

India vs UAE: How to watch the international friendly match live in India?