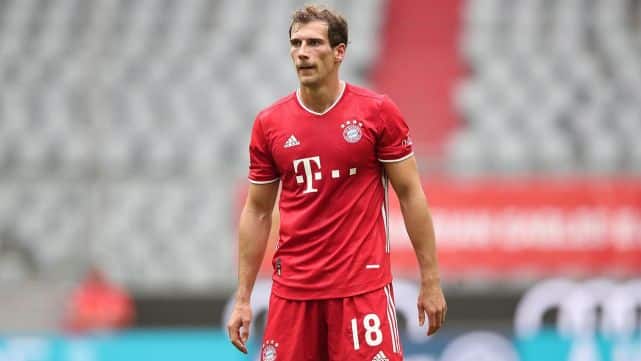 Bayern Munich star Leon Goretzka is reportedly being monitored by Chelsea as a potential transfer target for this summer. However, the Bavarians are keen to have the German international stay at the Allianz Arena by having him sign a new contract with them.

This news comes from the ever-reliable Fabrizio Romano through his social media accounts and has been the case for quite a while. The midfielder is one of the most important players in the Bayern squad and is one of the best all-round box-to-box midfielders in Europe. He can not only add a clinical touch to the attack but also rush back and defend when falling back.

His presence not only adds to the attack but also strengthens the defense. The player joined Bayern on a free transfer in 2018 from Schalke, and underwent a complete physical transformation in 2020 which saw him gain an eye-catching amount of muscle. He now has a year left on his contract and will start talks to extend it soon.

On the other hand, Bayern and Douglas Costa’s reunion will only last till the end of the season since they have decided that they do not want to make the Brazilian’s loan move permanent. He will hence, return to Juventus at the end of the campaign.

There were rumours that the Bundesliga Champions were considering making the loan move permanent, but those are not true since no talks between the two parties regarding the issue have taken place.