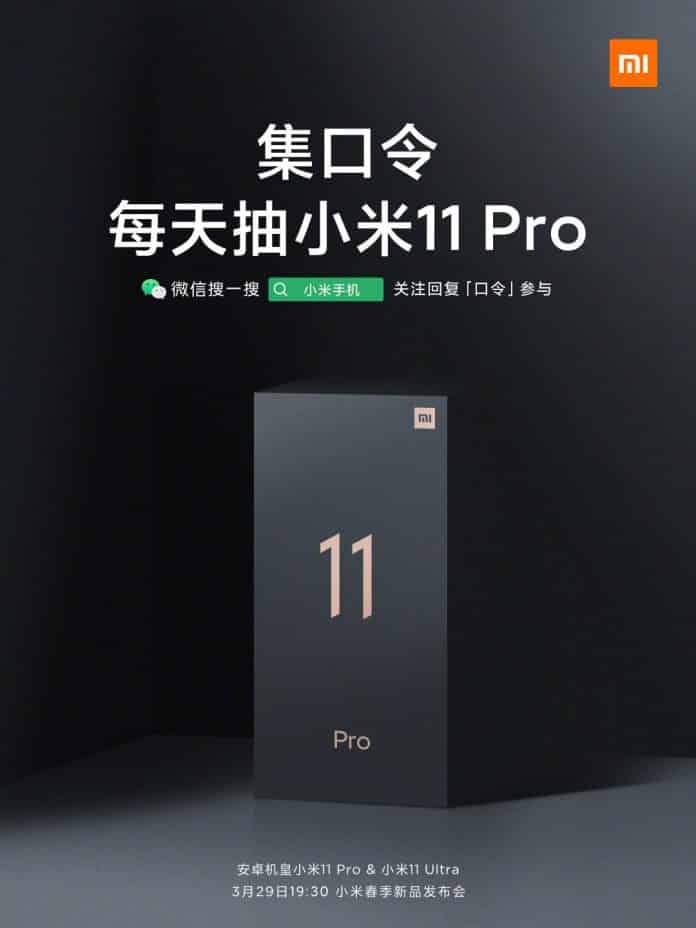 Xiaomi has already announced the New Product Launch Event on 29th March 2021 yesterday. This was shared for the global platform and at that time the company had not shared the details about the launch, most importantly the company did not mention the name of the device(s) clearly. But today the company has taken to its official Weibo account clearly mentioning the names of Xiaomi devices that will launch on 29th March. The smartphones that will launch on that day are Mi 11 Pro and Mi 11 Ultra.

On the recent two posters, the company had finally revealed the names of the two devices. The launch will be held globally on 29th March at 19:30 (GMT+8). The recent poster also reveals the black retail box of the Mi 11 Pro with a minimalistic design on it. The other poster shows a flawless display like the graphical image.

The Mi 11 Pro is mentioned as the “thin and lightweight” smartphone “Android King.” The company had launched the vanilla version which is the Mi 11 of the series last year as the world’s first 5G smartphone with Snapdragon 888 SoC and surprisingly it did not come with a charger in the box, if you could remember it was optional to add the charger in the box with the device.

This time if you see the black retail box of the Mi 11 Pro smartphone you can see it is wider than the Mi 11’s retail box. This clearly means that the Pro variant at least will come with a charger in the box. It is expected that both the Pro and ultra variants will support 67W fast charging and it is one of the upgradation over the vanilla variant.

The Mi 11 Ultra will have a totally different type of design and will feature a a secondary display on the rear camera module and its utility is still not revealed yet properly. Along with these two smartphones we can expect Mi Notebook Pro, Mi Band 6, Xiaomi Speaker 2, Xiaomi Robot Vacuum 2, Millet 11 Super Big Cup and Xiaomi Mi MIX Folding Screen.