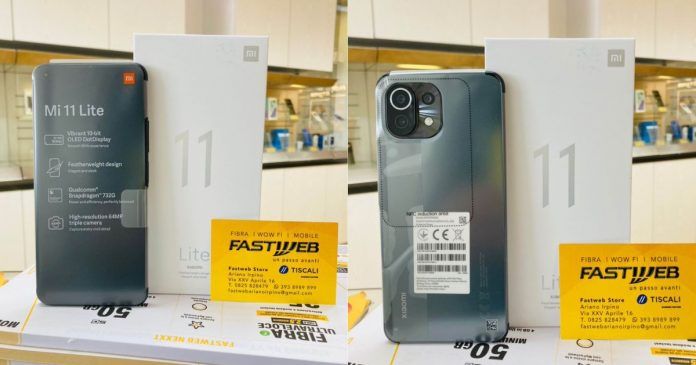 The Chinese smartphone giant Xiaomi is on the way to launch Xiaomi Mi 11 Lite officially. It has been informed from a current tweet by tipster Roland Quandt who has revealed that the handset is almost ready to purchase at an Italian retailer outlet. An online retailer has listed and also surfaced an unboxing video to expose its pricing and appearance in the original skin.

Technosell has exposed the 6GB RAM + 128GB storage version of the Mi 11 Lite smartphone. The price of this smartphone is 320 euros. It has seen in the screengrabs of the hands-on video, that reveals Mi 11 Lite has a punch-hole display also has a side-facing fingerprint scanner.

It has a squarish triple camera island on its backside. There is a plastic film on the display side that indicates key specifications like 90Hz OLED DotDisplay, a featherweight design, Snapdragon 732G, and a triple camera system of 64-megapixel.

The European variant of Xiaomi Mi 11 Lite 4G has been listed by many retailers ahead of launch.

Unfortunately, there is no specification available about the front camera of the Mi 11 Lite. It has the facility of rear camera set up with the facility of 64-megapixel primary lens, an 8-megapixel super-wide lens, and also a 5-megapixel telephoto macro camera.

This device is run on MIUI 12 which is based on the operating system of Android 11 OS. It also has many features like a microSD card slot, NFC, Bluetooth 5.2, and also dual SIM support.

The MicroSD card slot has lacked and it is expected that it will arrive in the variants such as 6GB RAM +64GB storage and 6GB RAM + 128GB storage. This smartphone will be available in three colors such as black, blue, and pink.