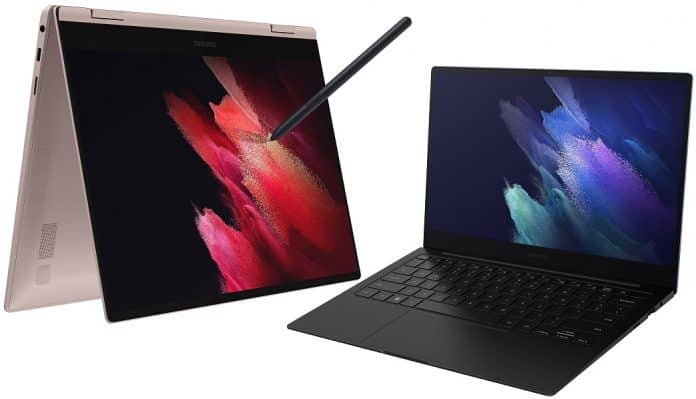 According to sources, both laptops come with Full HD AMOLED screens, while the Pro 360 convertible also has a stylus for enhanced touchscreen operation. The regular Galaxy Book Pro has either silver or denim blue, and the Galaxy Book Pro 360 comes in navy blue and gold color.

Both the laptops will come in 13-inch, and 15-inch variants, with 11th Gen Intel chips (i3/i5/i7) powering them, and the Intel Iris Xe iGPU will deal with graphics in most cases. We also know that there will be a discrete-GPU option for the larger 15-inch SKUs in the form of the Nvidia GeForce MX450 graphics unit.

It is a great thing that for its Samsung Galaxy Book, the OEM is also offering a Thunderbolt 4 port and optional LTE connectivity. The AMOLED screens are bordered by a rather thick “chin” bezel, but the side and top bezels are very slender.

We don’t have any details about the price of the Samsung Galaxy Book Pro and Pro 360. But, another tipster has revealed that it may launch in May.

Previous articleAll the list of Top 10 Movies with 4K Titles on Netflix
Next articleActivision Blizzard Might Go For More Layoffs, Kotick Got Huge $200M Cash Bonus