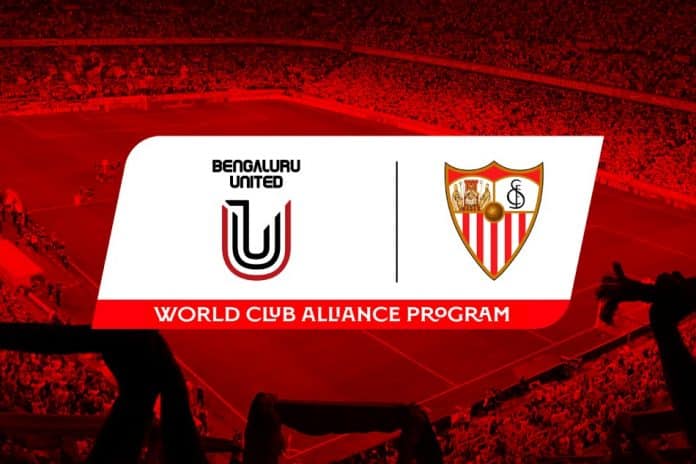 After Atletico Madrid, City Football Group, Borussia Dortmund, and some other European clubs, it’s for Sevilla FC to invest in India. The Spanish Giant ties up a 5 years deal with FC Bengaluru United.

Sevilla FC is currently 4th in the La Liga table. They have tasted some huge success recently. They have won six UEFA Europa Leagues in fifteen years

As per the agreement, FC Bengaluru United will wear Sevilla’s traditional white and red colours from the start of the 2021/2022 season. Both clubs will work together to set up shared footballing schools in Karnataka. The Spanish Club will help FC Bengaluru United in various aspects such as sports management, analysis, talent spotting, player development, and optimization of performance and usage of Sports technology.

Gaurav Manchanda, Founder of Nimida Sports confirmed the partnership between the two clubs. He said, “To welcome Sevilla FC to India is a truly momentous occasion. Their interest in and desire to be part of the Indian football journey is a great validation of the growing global appeal of Indian football. Their decision to partner with us is also testimony to the potential of FC Bengaluru United. This truly is a wonderful moment for all of us to take pride in our football and culture. FC Bengaluru United is on the ascendancy, our potential to grow and learn is tremendous and we couldn’t be more excited and honored than to have Sevilla FC’s assistance and experience as an invaluable guiding light on our growth trajectory.”

President of Sevilla FC, Jose Castro Carmona also delighted to announce the partnership. He said, “For Sevilla FC, this agreement with FC Bengaluru United is a great satisfaction. It is a magnificent opportunity to grow in a country as important as India, absolutely key in our international expansion strategy. Nevertheless, it is also a huge responsibility, because we have the challenge of transmitting all our knowledge to help FC Bengaluru United development, which will undoubtedly be a great challenge. We are completely convinced that we will achieve the ambitious goals that both entities have set for ourselves.”

Leicester City set to give £40,000 bonus to the squad for FA Cup win

Copa del Rey semi-final draws in full: Everything you need to know