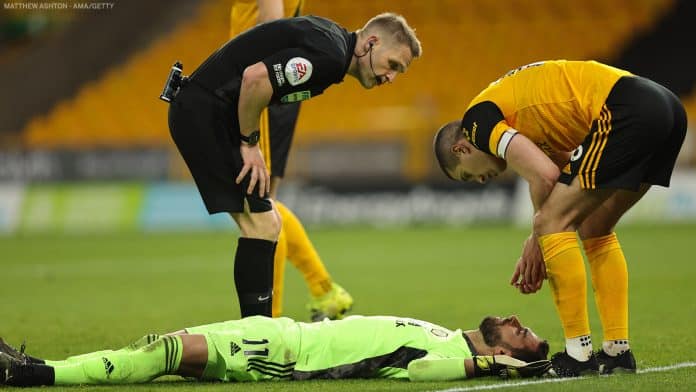 Wolves goalkeeper Rui Patricio suffered a nasty collision with captain Connor Coady right when regulation time was on the verge of completion and had to be stretchered off the pitch for dear of a concussion that prevented the player from carrying on.

The keeper’s head collided with Coady’s knee, and the player stayed down motionless, while the medics rushed on to the pitch to take care of the injured man.

The goalkeeper was not taken to hospital in the immediate aftermath of the 1-0 defeat, with Nuno confirming he is being assessed as medics await to find out if he has suffered a concussion: ‘He’s in good hands… the doctors tell me he’s okay.’

Diogo Jota scored the winner for the visitors in the stoppage time of the first half, scoring against his former club in the process. Here is what he had to say regarding his former teammate’s injury:

‘Life is more important, I hope it’s nothing too serious, we wish him a speedy recovery,’ he said of Patricio.

‘We need to improve a lot in this competition and hopefully this can be the start of a great run to the end of the season.’

Wolves have already had to deal with another major head injury to Raul Jimenez, and the absence of another key player in the form of Patricio will be a huge blow to their ambitions for the season.