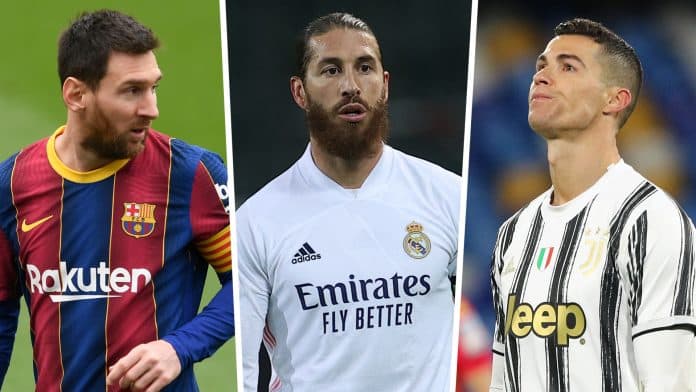 Sergio Ramos has been one of the mainstays of Real Madrid in the last few years. He has been captain fantastic with leading the team from the front. His current contract with the Spanish giants ends this summer, so there have been many speculations surrounding him.

The Real Madrid captain has talked about many things, including his contract situation at Madrid. Among all these things, he also talked about his former teammate Cristiano Ronaldo and his La Liga rival Lionel Messi.

Real Madrid have badly missed an out-and-out goalscorer ever since Cristiano Ronaldo left the club in 2018 for Juventus. Although Benzema has stepped up still, it’s a huge ask for someone to fill Ronaldo’s boots.

Ramos laments the departure of Ronaldo: “Cris lost and Madrid lost [when he left]. I wouldn’t have let him leave because he is one of the best and he would have brought us closer to winning [big trophies].”

“These are relationships that have to be for life, it has to be a team fusion. He is a decisive player who helped us win.”

Barcelona’s captain Lionel Messi will also be a free agent this summer, so Ramos was asked whether he could see him heading to the Estadio Santiago Bernabeu?

Ramos said with a smile: “I would be delighted to welcome Messi [to Real Madrid]. I’ll make my house available to him for the first few weeks.”

“We had to suffer Leo in his best years, so the fact of not having to face him would be good.”

“He would help us win and achieve more success. It would be silly to say otherwise.”

Sergio Ramos was also asked whether he could join Barcelona next season. The Madridista said: “There’s no way.”

“I have a special affection for [Joan] Laporta because I like him a lot. But there are things in life that money can’t buy. Just like you wouldn’t see Xavi [Hernandez] or [Gerard] Pique at Madrid…”