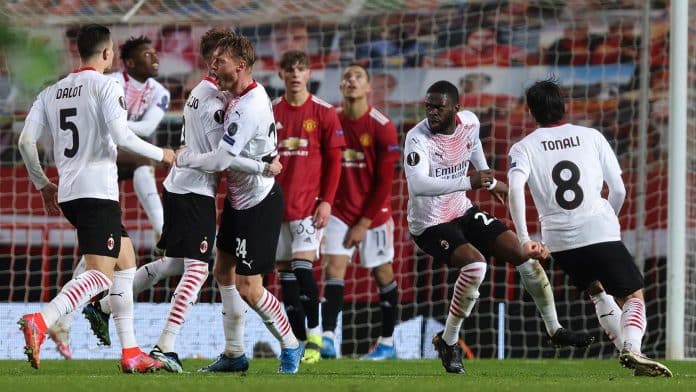 AC Milan go away from Old Trafford with a crucial away goal in UEFA Europa League Round of 16 first leg.

AC Milan traveled to Old Trafford last night to face Ole Gunnar Solskjaer’s man. The Italian giant was highly dominating from the start. They found the net twice in the first half, but VAR denied the goal both times.

In the second half, Ole brought on Amad Diallo in place of Anthony Martial. The quick movement and skill of the 19 years old caused trouble to AC Milan. Amad Diallo broke the deadlock in the 50th minute from a clever header from Bruno Fernandes’ pass. The Ivorian scored his first goal in Manchester United jersey after joining them last January.

Manchester United created some chances later but failed to convert them. As a result, they were punished in the injury time as Simon Kjaer scored the equalizer for AC Milan.

“He (Simon Kjaer)’s a good player, he’s strong and makes a good run, and his marker gets blocked off, so he gets in front of him. Disappointed, but then again, that can happen.”

“Of course, it is always more difficult when you concede a goal; you’re never happy when you do. One minute before full-time is also disappointing, but we’ve got to take that on the chin, travel down there, and go for it.”- he added.

Manchester United will travel to Milan next for the second leg of the tie.

Previous articleDoes Marcos Llorente deserve more appreciation than what he gets?
Next articleManchester United and Paris Saint-Germain turned down the chance of signing Cristiano Ronaldo last summer