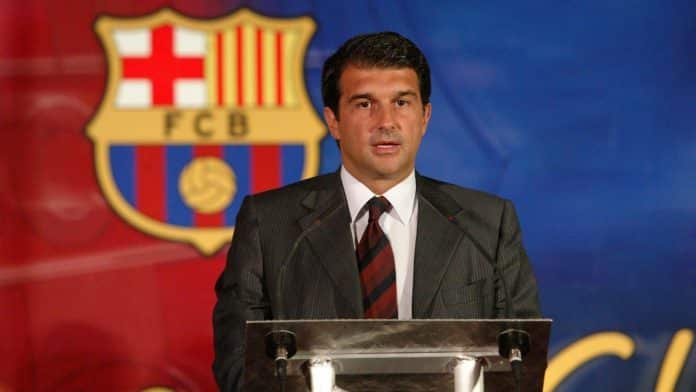 After winning the FC Barcelona Presidential election earlier this week with more than 54% of the votes, Joan Laporta begins his second reign as Barcelona President. He held the position between 2003 and 2010, when the La Liga club won the treble under Pep Guardiola, claiming 12 trophies, including two UEFA Champions League titles and four league titles.

The 58-year-old oversaw one of the most successful times in the club’s history by making some brilliant signings. Here, we rank five of the best signings made by Laporta in his first spell as Barcelona president.

Laporta promised electorates that he will bring in a certain Manchester United star in David Beckham, but the midfielder chose Real Madrid, however bad it may sound, this might just have been the turning point in Barcelona’s history. Brazilian star Ronaldinho was signed in place of Beckham and his arrival was integral to Laporta’s presidency.

The former Brazil international was key in helping reposition the club at the summit of the domestic and international game, as he helped reestablish the club both on and off the field. At the time of his signing, Barcelona had not won a trophy in five years, but just two years after his arrival, Ronaldinho’s otherworldy abilities on the field helped the Blaugrana win the La Liga title and the UEFA Champions League in 2006.

Ronaldinho made 207 appearances for the club leading them to numerous honors and, he won a number of personal accolades himself including the Ballon d’Or for his performances during his time in Spain.

His status in the new social media era as the first global superstar footballer and someone who always had a smile on his face also helped boost Barcelona’s marketing appeal off the field. And if all this was not enough, Ronaldinho helped pave the way for a bright future for an Argentine superstar, Lionel Messi.

Dani Alves has a special place in Barcelona’s history. He was Pep Guardiola’s first signing and he was arguably the second most important player in Guardiola’s era after Messi.

Considered one of the best right-backs to have ever played, the former Sevilla man made 391 appearances for Barcelona in all competitions. He scored 21 goals and assisted 101. His on-field understanding with Messi proved to be a major catalyst to Barcelona’s glory years under Guardiola.

The Brazilian international is currently the most decorated player in the history of football with 23 of his trophies coming in eight trophy-laden seasons at Camp Nou.

Unlike the other names on this list, Gerad Pique was a member of the La Masia alongside Lionel Messi and Cesc Fabregas. After a brief spell with Manchester United, the center-back returned to Barcelona, and the decision to sanction his return ranks as one of the shrewdest decisions of Joan Laporta during his spell as president at the club.

At the height of the club’s golden era, Pique partnered with Carles Puyol and the rock at the heart of defence for Barcelona is now acting as the mentor of younger partners since Puyol’s retirement.

The 34-year-old has made 559 appearances in all competitions for Barcelona at the time of writing this. Many have pinpointed him as a future Barcelona president as he is also business savvy, with degrees acquired from prestigious universities.

For five seasons, Samuel Eto’s acted as the focal point of Barcelona’s attack. With Ronaldinho, Deco, and later Lionel Messi supplying sumptuous balls, the four-time African Player of the Year scored goals with reckless abandon. The former Cameroon international was an integral part of the success enjoyed by Barcelona in his five years at Camp Nou.

Eto’s departure from the club was controversial in the summer of 2009, and poetic justice was served when he helped his Inter Milan side eliminate his former club in the Champions League en route to becoming the first player to win consecutive continental trebles.

Deco was an integral part of Jose Mourinho’s 2004 UEFA Champions League triumph with Porto before completing a move to Barcelona that summer.

Alongside Ronaldinho, the former Portugal international helped Barcelona win the La Liga in 2005, which they successfully defended a season later. The UEFA Champions League and the FIFA Club World Cup were added to their trophy cabinet in 2006.

Deco was named the UEFA Midfielder of the Year, which made him the first player to win the award with two different clubs as he won the award in his stint at Porto as well. He was named the Best Player of the tournament and the MVP in the final of the FIFA Club World Cup.

Deco signed for Chelsea in the summer of 2008, after making 161 appearances in all competitions for the Blaugrana, scoring 21 goals and providing 45 assists.

Honorable Mentions: Thierry Henry, Eric Abidal, David Villa (a gift to the next president as Laporta had reached an agreement with Villa but the player was signed after his departure).

Previous articleDavid Alaba doesn’t have a verbal agreement with Barcelona; Real Madrid still in the front to sign him
Next articleSamsung Galaxy M12 launched in India with a 6000 mAh battery starting from Rs 10,999

David Beckham open to helping Indian football in the future

Top 10 players with the most international assists of all-time