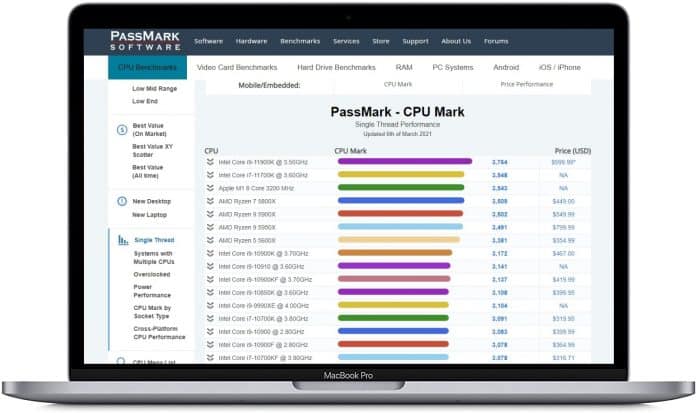 We already know how awesome Apple’s M1 SoC is, and we have written about it a lot. After all, it is the company’s first-ever ARM-based processor for its Mac series models, and also it can be found inside the companies latest MacBook Pro laptop and the Mac Mini desktop.

But, it seems like the Cupertino giant is still improving the chip. According to PassMark’s latest performance chart, the 5nm chip has made a name for itself in the single-thread performance and in a strong way. Though being relatively new in the market, the chip sits in third place behind the best Rocket Lake performance and has already surpassed the mighty Ryzen 5000 series.

The best thing is that Apple’s M1 gives desktop CPU-level performance but with laptop CPU-level power requirements. The performance chart scored a CPU Mark rating of 3,453 points with 8-core and 8-thread’s, which puts it just -0.14% (five points) behind the Intel Core i7-11700K.

We already know that Intel is solely focusing on single-threaded performance for its Rocket Lake processors to ensure its success, as demonstrated by its 3.60 GHz to 5.0 GHz clock speeds. But, M1 has a much lower boost rate of 3.20 GHz but can offer a performance per watt level that the i7-11700K can’t even get close to. And its single-threaded score is almost on-par with the highest score of Intel’s Rocket Lake. Ouch, that’s going to hurt Intel in a big way.

The Apple’s Silicon has a 10 W TDP for passively cooled devices and a higher TDP variant for actively cooled machines, while the Intel Core i7-11700K stands at a 125 W TDP. Compared to AMD Ryzen 7 5800X with its 105 W typical TDP, it has a single-thread performance rating of 3,509 points. At the same time, the Apple silicon with its points has a +0.97% advantage.

Of course, intel and AMD are in no way inferior to Apple’s new Silicon and can trash the M1 pretty bad with their higher clock speeds. But, Apple’s M1 proves the company’s motto that the M1 “features the world’s fastest CPU core in low-power silicon” and “the world’s best CPU performance per watt.”

Previous articleLenovo Yoga 6 with up to Ryzen 7 4700U & 16GB RAM launched in India
Next article‘Ozark’(Season 4): All the Details We Know So Far