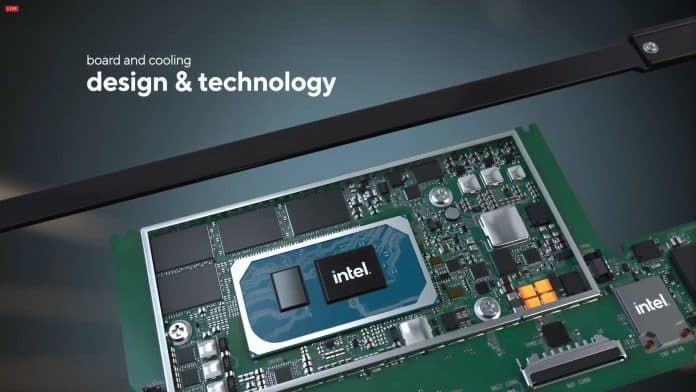 Intel is planning to launch its other Tiger Lake-H CPUs with 45W TDP in the coming days as AMD’s Ryzen 5000H SKUs are damn impressive. So, it seems already Intel has offered these unreleased CPUs to OEMs as we saw the leaked Lenovo Legion 5 being offered with these unreleased Tiger Lake-H processors.

In the same way, @momomo_us has again uncovered these upcoming Tiger Lake-H SKUs on a laptop which is designed for business as it sports Windows 10 IoT Enterprise. The laptop features a 17-inch display with a touch option and resolutions of FHD or 4K.

The specs seem to be fair enough, and most probably, it is an upcoming portable business laptop. Much like what we saw with the Legion 5, this laptop will also give a lot of Tiger Lake-H CPU options, including the base Core i5-11400H with six 10nm based Willow Cove cores, sporting a 2.2GHz base and 4.5GHz boost clock speeds.

This is definitely an undervolted variant as originally on the Lenovo machine the Core i5-11400H comes with a 2.7 GHz base clocks. The situation remains the same with the Core i7-11800H, sporting 8 cores along with a 1.9 GHz base and 4.6 GHz boost clock speeds, originally said to sport 2.4GHz base clock speeds.

On the other hand, the Core i9-11900H seems to come with a 2.1 GHz base and 4.9 GHz boost clock speeds, originally supposed to come with 2.5 GHz base clocks. So, from the leaks, the existence of these CPUs seems to be confirmed and we do not have to wait much longer to see them in action as they were promised to launch on laptops in Q2 2021.

Previous article
ASUS confirms the GeForce RTX 3050 Ti as it is likely to feature on the new TUF Dash F15 laptop
Next article
Manchester United will have to pay another £4.2 million to Sporting CP if Bruno Fernandes wins PFA Player of the Year