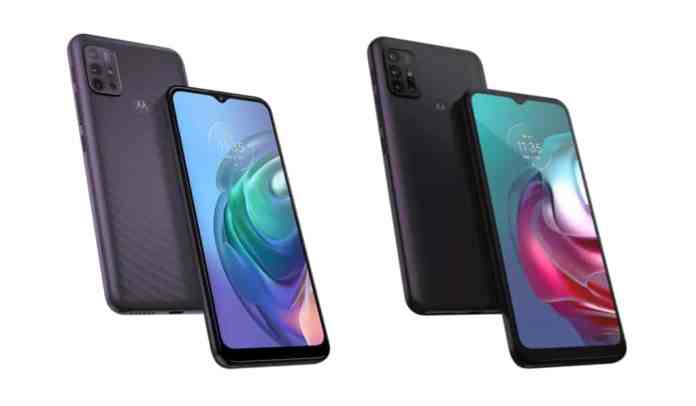 Motorola had launched its two budget-friendly smartphones in Europe last week, named Moto G10 and Moto G30. Now, a renowned Indian tipster Mukul Sharma has tipped that both those phones are about to launch in India in the first week of March.

Moto G10 flaunts a 6.5-inch HD+ display and has a modest refresh rate of 60Hz. It has a notch for the selfie camera and is powered by the Snapdragon 460 mobile processor. In terms of optics at the rear panel, it includes a 48-megapixel primary sensor, an 8-megapixel ultra-wide-angle sensor, and two 2-megapixel sensors for macro shots and depth sensing. It has 4 GB of RAM and up to 128 GB of internal storage.

The smartphone houses a 5,000mAh battery with support for 10W charging. It is IP52 water-resistant and has other features like 4G, Wi-Fi, Bluetooth 5.0, NFC, GPS, and a 3.5mm headphone jack.

Moto G30 sports a 6.5-inch HD+ IPS display and has a screen resolution of 720×1,600 pixels. It is powered by the Snapdragon 662 SoC. It has a quad rear camera setup at the back. That features a 64-megapixel primary sensor, an 8-megapixel ultra-wide-angle sensor, and two 2-megapixel sensors for macro shots and depth sensing. For selfies, you will see a 13-megapixel selfie shooter.

It is also powered by a 5,000mAh battery but has a faster 20W charging support. It also has P52-rated water resistance. It has a RAM of 6 GB and internal storage of 128 GB. This storage can be expanded with the aid of a microSD card.