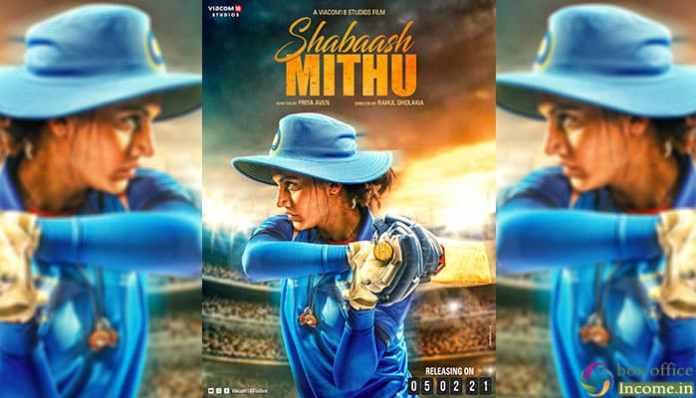 A picture has been shared by Taapsee Pannu of the preparatory session of her upcoming film Shabaash Mithu. This film is based on the biopic of incredible woman cricketer Mithali Raj. The actress has posted an image of her from a field on Wednesday night.

We have seen that Taapsee holding a bat in her hand and with a determined look on her face, he has written that the romance with the bat and the ball had begun. The post has accompanied the hashtags of WomeninBlue and #ShabaashMithu and added that long way to go but a good start is half of the job done.

It is expected that this will going to another level milestone of sorts for our captain cool Mithali raj biopic and all her women in blue.

We also have seen that last year the actress has released the first look from Shabaash Mithu and she was written that she had always been asked who’s her favorite male cricketer but we should be asked them about their favorite female cricketer. This statement has always rise a question that can hit every cricket lover pause and reflection that they love the game or the gender who are playing it. She also said that Mithali Raj is a game-changer.

The film Shabaash Mithu, a biopic on the women’s cricket team captain Mithali Raj that is directed by Rahul Dholakia. Taapsee Pannu who is playing the lead role in this film has announced the association with the project on Mithali Raj’s birthday in 2019.

She dropped a tweet with the cricketer and wrote that Happy Birthday captain. On this birthday, she didn’t know what gift she could give her but this promise that she should give that all she had or make sure that the cricketer would be proud of what she saw off herself on screen with Shabaash Mithu. She also had said that she was prepared to learn the cover drive.

We have lastly seen Taapsee Pannu in Anubhav Sinha’s Thappad film with a very busy schedule ahead. This filming lineup of the films has included Vinil Mathew’s thriller Haseen Dillruba, a sports drama Rashmi rocket and also Looop Lapeta which is a Bollywood remake of the hit German movie Run Lola Run.