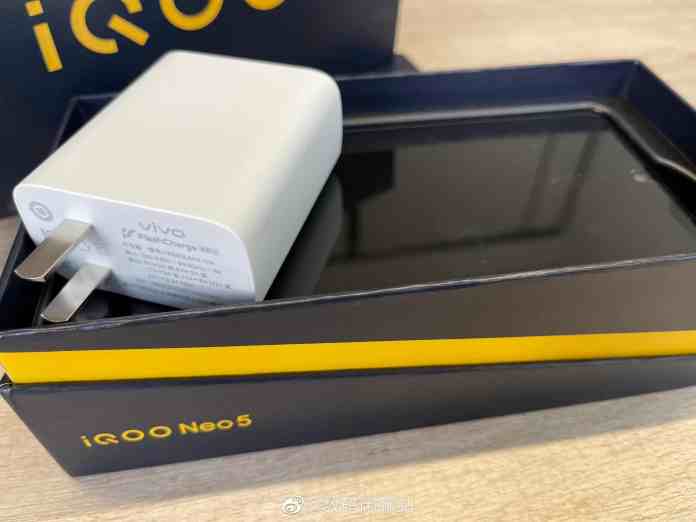 iQOO is heating up to launch its upcoming smartphone iQOO Neo5 and the launch is imminent. Hence, we’ve been getting a few leaks regarding this upcoming iQOO Neo5 on social media for a while now. Recently, a new report has come up showing the retail box of the Neo5 along with its 66W Flash Charger.

As per the shared leaked image of the retail box of the upcoming iQOO smartphone, the box typically looks like a normal retail box of iQOO smartphones having Black and Yellow accents in which “iQOO” has been written in yellow. We can also see the ‘iQOO Neo5’ moniker on the side of the box.

Apart from it, the display of the phone is slightly visible which features a teardrop notch panel. The earlier leaks also suggest a similar kind of display in iQOO Neo5. The image also shows that the device will run on the Android 11 OS and the SoC will be paired with at least 128GB of internal storage.

On the other hand, we can see a 66W FlashCharger as well in a leaked image. This is basically a Vivo’s FlashCharger and as per the tipster, it can charge the whole battery of the device in around 30 minutes. However, we’ve not got any confirmation from the company about the capability of that 66W FlashCharger over its battery. We have to wait further to get the official confirmation.

Share
Facebook
Twitter
Pinterest
WhatsApp
Linkedin
Previous articleOverwatch 2 will feature hundred of Hero Missions along with The Dynamic Weather
Next articleAmazon India brings Fab Phones Fest: starts tomorrow with up to 40% off on Mobiles & Accessories