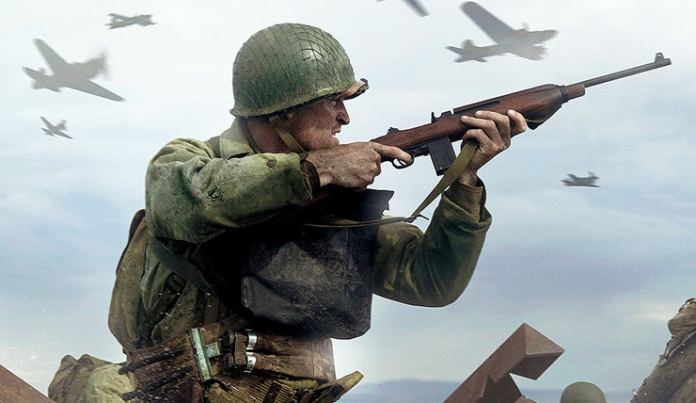 It’s not very clear that one new premium Call of Duty is releasing in 2021; like always, Activision hasn’t revealed any details about the game yet. Many reliable insiders have said previously that Sledgehammer Games will totally develop call of Duty 2021, and now a few rumours about the game’s setting have come on the scene.

Victor Z, a well-known Call of Duty insider, leaked several correct information about call of Duty: Black Ops Cold War. Now it seems he is teasing about the upcoming CoD title, which could head back to World War II. He posted on Twitter, featuring a piece of art from Call of Duty: WWII and a sledgehammer…

One other Twitter user asked whether a futuristic “World War III” is coming as the new title, the leaker then clearly pointed towards WWII.

For now, take all these as a pinch of salt, and Sledgehammer heading towards WWII would make sense. If Sledgehammer again reaches Big One, then all the three CoD developers of Activision will have a separate take on the franchise to focus on – Treyarch can do Black Ops, Infinity Ward can continue with Modern Warfare, and Sledgehammer can give their focus on historical stuff.

In recent years, Sledgehammer has been through something of an upheaval, begins with the departure of co-founders Michael Condrey and Glen Schofield in 2018. It is said that Activision has been building Sledgehammer back up, with the target of making it a multi-project studio. Andy Wilson, the new Sledgehammer boss, said back in 2020…

“Sledgehammer Games is entering a period of growth across both of our main studio locations: Foster City, California, and Melbourne, Australia. We’re now a multi-project studio, and we’re looking for a substantial number of new team members to join us. We’re looking across every discipline and various levels of seniority. It’s a pretty exciting time for our studio.”

Let’s see, if Activision brings another WWII-set Call of Duty or not.