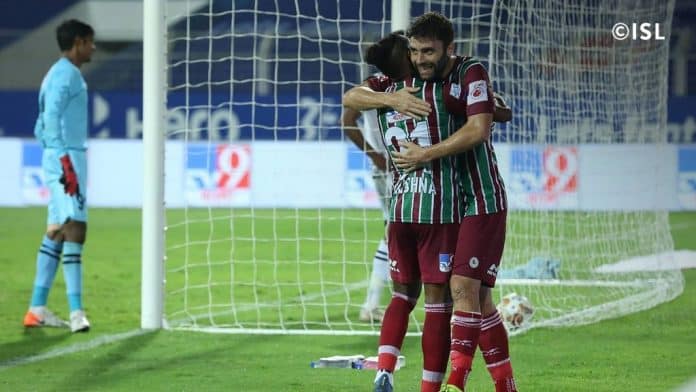 ATK Mohun Bagan won the prestigious ‘Kolkata Derby’. They made the double over their rival SC East Bengal in the 100th year of the legendary Kolkata derby. The Mariners have five wins in a row now and lead Mumbai City FC by five points at the top of the Hero Indian Super League table.

ATK Mohun Bagan beat SC East Bengal convincingly by 3-1 at the Fatorda Stadium on Friday. Both the teams were come up with an unchanged XI. Roy Krishna opened the deadlock on the 15th minute of the game. But SC East Bengal pulled one back through an own goal from Tiri before half-time. But the Mariners sealed the victory after two excellent goals from David Williams and Javier Hernandez.

ATK Mohun Bagan made their intentions clear from the start, putting the SCEB defense under pressure. SCEB failed to find the solution in the whole match. Defensive errors cost East Bengal many times this season and today was not any different.

SC East Bengal assistant coach Tony Grant was unhappy with the second goal conceded by his team. After the match, he said, “I thought it was a good derby game. It was an honest game. Strong game. Obviously, the sloppy goal that we gave away, the second goal was the turning point. It is a derby game, it’s a (goal) each and we gifted them the second goal.”

“In the derby game, the opposition did not do too much to win the game. We helped them. Both teams canceled each other out. It wasn’t great football played by both the teams. They have a ball over the top that’s their gameplan. It was a big game. The second goal was the turning point. Of course. At 1-1, we had bright runs. We gifted them the goal. At 1-1 It was very hard to pick who was going to win the game.”- he added.

The season has already ended for the Kolkata giant, SC East Bengal. It was not a satisfying debut season for them. The Red and Gold will surely need to think about this before the start of the next season and want to come back stronger in the 2021-22 season.