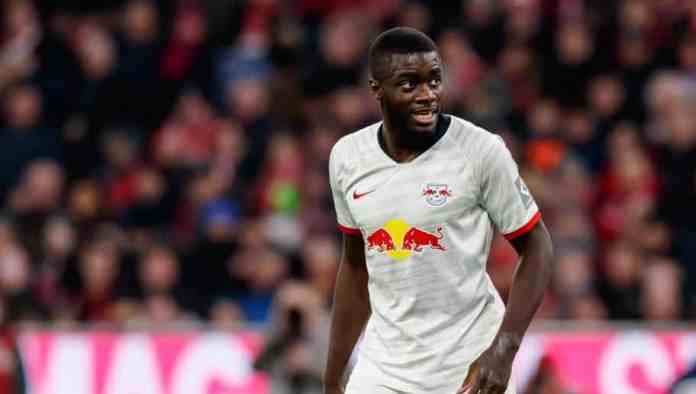 Dayot Upamecano has been marked as a Bayern Munich player from the start of the 21/22 season with the Bavarians having agreed all personal terms with the young centre-back. However, while the race was on for the defender in recent times, it must be clarified that Manchester United were never in for the player.

They scouted and appreciated him but never approached the player, nor his agent regarding concrete talks. Of all the Premier League clubs, Chelsea were most interested. Thomas Tuchel was very impressed by him and was interested in securing the Frenchman’s services.

However, they couldn’t pay the clause right now. They needed time to wait till the summer to promise Leipzig the funds required. Liverpool too, wanted to plan on finalising talks with Upamecano next summer.

Ozan Kabak and Ben Davies were signed during the winter transfer window by the Merseyside club to reinforce the centre-back position, downplaying the need for another man at the back. Both Chelsea and Liverpool were in contact with Upamecano’s agent but nothing went down.

Bayern recognised the danger they were facing in signing the player and negotiated early with Upamecano and had prior agreement with Leipzig. Chelsea and Liverpool were armed with big money but Bayern moved quickly to get their man.

With that said, though, they are not paying Upamecano’s €42.5 million release clause right now. The Bavarians will pay in the summer, when the player makes the switch to the Allianz Arena.