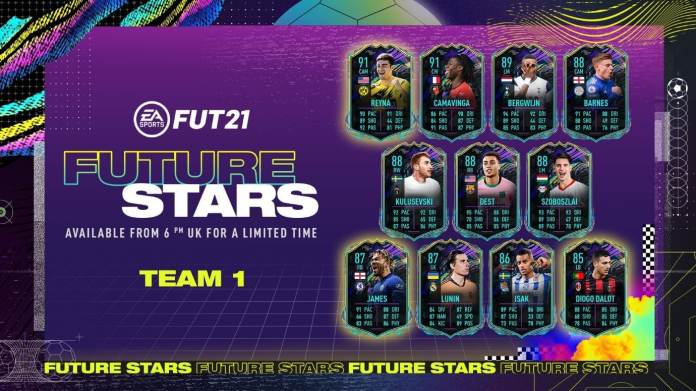 It won’t be long now until the Future Stars team 2 become available in Ultimate Team, and the question on everyone’s mind is: who gets upgraded FUT cards?

EA has confirmed that the FIFA 21 Future is a two-week promo, with Team 2 unveiled and released in packs on today’s Friday!

So, without further ado, let’s move on to our predictions for the FIFA 21 Future Stars Team that will be released today. However, these predictions are based on the 2020/2021 performances of the potential ‘future stars’ and are in fact very likely to make it into the Future Stars promo’s 2 selection:

Like we mentioned before, nothing from this list has been confirmed for Team 2 prediction. But these are some of the most promising players in Europe’s top leagues. That means it’s pretty safe to assume that at least some of these players will make it into Future Stars Team Team 2. For now, we just have to wait until the promo starts and EA will no longer keep us in suspense for Today!

If you are like us and sitting on the edge of your gamer seat for this promo to kick off, make sure to top up your FIFA Points at Startselect. You will definitely want to add these promising players to your team as soon as possible. That’s why Startselect makes sure you receive your code by email directly after purchase. Now all that’s left to do, is wait for the FIFA 21 Future Stars to go live!