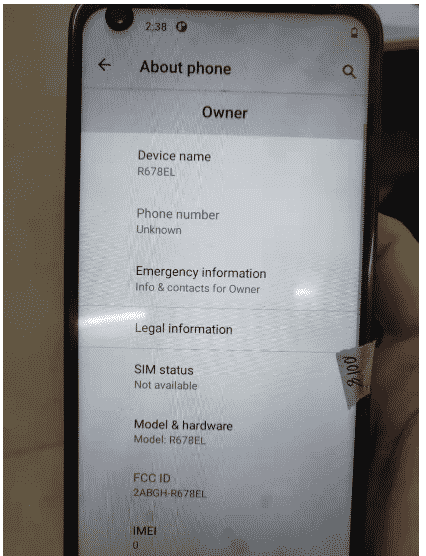 The device name in the above picture of the phone is R678EL and there are no more information in this image.

Most importantly, all of the upcoming smartphones have been listed for the FCC certifications. The Reliance Orbic Myra 5G and Orbic Magic 5G are confirmed that they will feature the 5G connectivity whereas we don’t have any confirmed information about the Orbic Maui, whether it will have 5G or not.

As of now, from those leaked images from FCC certifications, it is confirmed that the device will come with the Android 10 OS. It is also expected that those phones will be stock android smartphones, which means no extra bloatware or OEM skin. If we look into history, when Jio had come with 4G connectivity first time (5th September 2016), the company made it so much cheaper than the other SIM companies. That’s why Reliance had managed to get a huge amount of profit by the Jio 4G. Because every Indian started using it. So, it is also expected that in the case of newer 5G connectivity featured smartphones, the company will provide the devices for a much cheaper price than others.

Jio, Airtel to gain more market share at the cost of...

Aliasgar Ayaz - March 3, 2021 0
In the recently concluded Telecom Spectrum Auction 2021, Reliance Jio turned out to be the most aggressive bidder as it was reported earlier. Jio...

RELIANCE JIO ANNOUNCES ACQUISITION OF SPECTRUM IN THE 800 MHZ, 1800...

Reliance to bid for Digital Payment network in partnership with Google...

China’s spending on Research and Development hits a record high of...