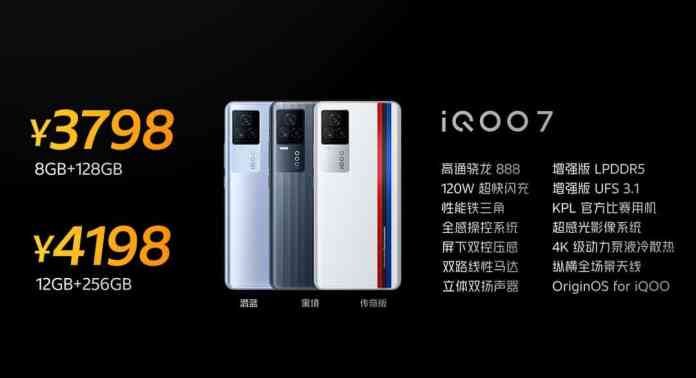 In the previous month, iQOO had launched its latest flagship smartphone iQOO 7 for the Chinese market. Now, a report has come out from Indian tipsters which looks like almost confirmed, saying that iQOO is going to launch a flagship device in India by the end of March (probably on the third or fourth week) and that’s why we can expect that the upcoming phone is iQOO 7 and now it is for the Indian market. Apart from it, it is said that iQOO will launch another two devices in India by the end of April. So, in the next two months, we are going to witness three smartphones from iQOO. So, let’s move forward with it.

Also Read: Samsung Galaxy S21 vs Xiaomi Mi 11 vs iQOO 7: Which is the most powerful flagship device?

iQOO 7 runs OriginOS based on the Android 11 OS and is powered by an octa-core Qualcomm Snapdragon 888 chipset. Coming to the display, this phone offers a big 6.62-inch FHD+ AMOLED centered hole-punch display supported by a faster refresh rate of 120Hz.

The SD 888 SoC of this phone is paired with 8GB/12GB of RAM and 128GB/256GB of internal storage. Coming to its camera section, the iQOO 7 offers a triple rear camera setup combined with an LED flash that includes a 48MP primary sensor along with a 13MP ultra-wide sensor, and a 13MP depth sensor. We can see the iQOO official branding on the rear camera module. For selfies, this phone has a 16MP selfie snapper at the front.

In terms of battery, the iQOO 7 is fueled up by a decent 4,000mAH battery but guess what, this phone is taking the charging to another level with its massive 120W of fast charging. Regarding connectivity, this phone has everything including 5G. This phone measures 162.2 x 75.8 x 8.7 mm and weighs around 209.5g.

Samsung Galaxy S21 vs Xiaomi Mi 11 vs iQOO 7: Which is the most powerful flagship device?