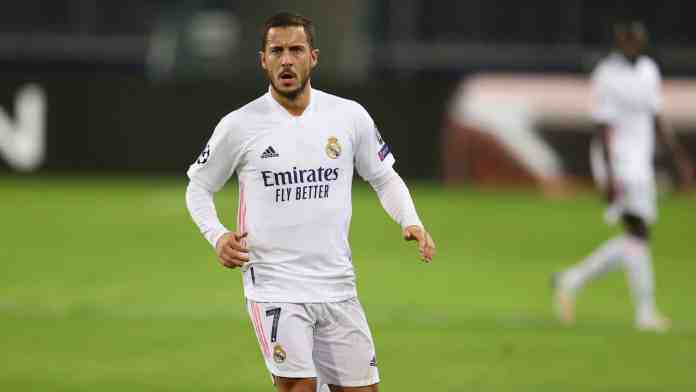 Real Madrid are having a tough time keeping their players fit this season, and Eden Hazard once again finds himself on the injury list, plunging the Belgian into further frustration regarding his Madrid career. In addition to the winger, Rodrygo, Sergio Ramos, Fede Valverde, Dani Carvajal, Lucas Vazquez, Isco and Alvaro Odriozola are also out.

This lengthy list of players sidelined could see Zinedine Zidane turn to the Real Madrid Castilla team to make up the numbers and give the youngsters the chance to help the first team in times of dire need.

Victor Chust is reportedly viewed as the heir to Sergio Ramos at the club, with the 20-year-old playing the entirety of the 2-hour match that saw Madrid succumb to Alcoyano in the Spanish Cup.

Miguel Gutierrez has been regularly training with the first team, and Zidane have the player his Madrid debut in a friendly against Fenerbahce in 2019. He is being viewed as a direct replacement for Marcelo and a competitor against Ferland Mendy for game time.

Elsewhere, on the attacking midfield front, Sergio Arribas and Takuhiro ‘Pipi’ Nakai are two prospects that can offer Zidane some selection headaches in terms of options in midfield. Arribas has already made a few appearances for the first team off the bench and is being preferred over Isco already.

Los Blancos’ chances of retaining their title are getting slimmer with every passing match day, with the odds being stacked against them in the form of injuries and inconsistencies. All that said, Madrid did manage to win their last outing in the league against Huesca.

Zinedine Zidane’s team face Getafe tomorrow at home, with a chance to go second ahead of Barcelona. However, the win won’t come easy despite bookmakers favouring the reigning champions to make short work of the visitors.