Indian vs England: India lost the first Test by 227 runs as England take 1-0 lead in the 4 test match series 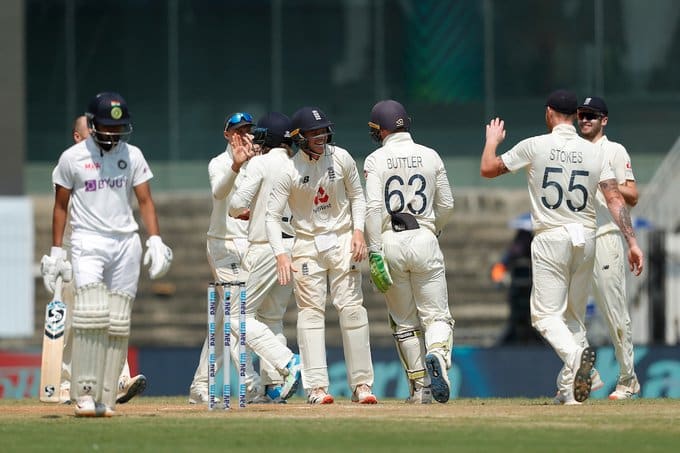 India lost the first Test against England in Chennai by 227 runs.

In the first Innings, England scored a massive 578 runs. In response, India was all out for just 337 runs. England denied the chance of ‘follow-on’. In the second innings, Indian bowlers did a pretty good job and restricted them within just 178.

England set a target of 420 runs in the last innings to win the game. But excellent spell from England bowlers especially James Anderson [3 wickets for 17 runs in 11 overs] and Jack Leach [4 wickets for 76 runs in 26 overs]. India lost 5 wickets in the morning session as James Anderson bowled a vintage spell of reverse swing. Virat Kohli [72] and Shubman Gill [50] had a better day. But other Indian batsmen failed to deliver today.

After the match, Indian skipper Virat Kohli said, “I don’t think we put enough pressure on them with the ball in the first half. Collectively as a bowling unit, fast bowlers and Ashwin were good in the first innings but we also needed to contain a few more runs and create pressure.

“Credit to England, they got stuck in and put up a big total on the board. Our body language and intensity were not up to the mark, the second innings we were much better. We were better in the second half of the first innings with the bat, not the first four batters. We have to understand the things that we have done decently in this game and the things that we haven’t and as an aside, we are always looking to improve. England was far more professional and consistent throughout the Test match than we were.

After this loss, India now drops down to 4th position in the ICC World Test Championship Points Table. In comparison, England climbed up to the top spot.

The second Test of the series will start on 13th of February. Team India will surely be looking for a strong response and level the series. They will also have the home advantage as a limited number of fans will be allowed inside the stadium in the second test.