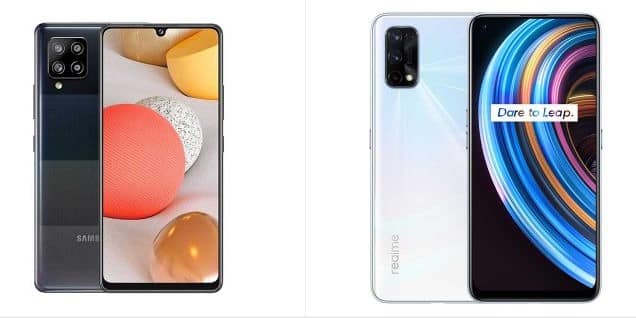 The 5G smartphones are in demand as people are aware that it is the technology that is going to rule the future. Today, we are to compare two such smartphones, one is Realme X7 and the other is Samsung Galaxy A32. Let’s see which one is better.

Realme X7 5G offers a 6.4-inch FHD+ Super AMOLED punch-hole panel with a screen resolution of 2520 x 1080 pixels. Samsung Galaxy A32 5G showcase a 6.5-inch HD+ Infinity-V display. Both smartphones have a refresh rate of 60 Hz. Both the displays are pleasant in their way and it is hard to separate between the two.

Talking about the front camera, Realme X7 5G has a better selfie snapper of 16 MP lens as compared to Samsung Galaxy A32 5G’s 13 MP sensor.

But when we look at the fast charging equipment, Realme X7 betters Galaxy A32 by offering 50W charging rather than the latter’s 15W fast-charging.

In terms of processor and camera, we can say the Realme X7 comfortably defeats Samsung A32. The Realme device has a better primary camera and selfie lens. Thus, offering better picture quality to users. In terms of price, as well, you will get Realme X7 at almost Rs 4500 discount when compared to Galaxy A32.

Another benefit that goes in favor of Realme X7. Even though Realme X7 offers a fast charger, we cannot ignore the strength of the battery cell of the Samsung A32. This domain surely goes in Samsung’s favor. Thus, taking note of all the aspects, we can say that Realme X7 comes out as a better option.

5G-spectrum auction will take place next month in India, official rollout to happen by September 2022