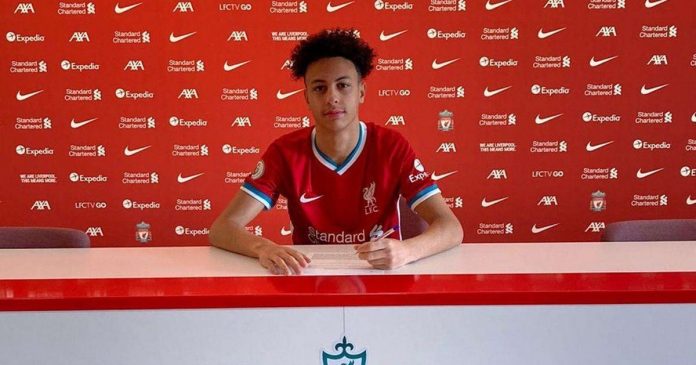 Kaide Gordon joined Liverpool form Derby County in an undisclosed price. Kaide Gordon was the Rams’ academy player of the year. He is also considered as the ‘best 16 years old in the country’.

Gordon was in Derby academy since the age of six. He was the fourth-youngest player ever to represent the senior team when he came on as a substitute against Birmingham City in December. He was on manager Wayne Rooney’s bench three times without playing.

Gordon thanked his boyhood club after signing the contract with Reds. He said, “I would like to thank everyone at Derby County for the last 10 years.”

“Since signing for the club at the age of 6, I’ve worn this shirt with pride and I wouldn’t be where I am today with the support and guidance of everyone at the club, and all the coaches and medical team who have played an important role in my development over the years.”

“I would like to wish everyone at the club all the best for the future.”

Gordon has made his mark while playing Derby’s U-18 and England’s youth team. He has scored three goals in five matches for Derby’s youth team.

Last week Derby County manager Wayne Rooney was asked about Gordon’s move to Liverpool. He said, “There has been an offer for Kaide (at Derby) since before I have been in this role,’ Rooney said. ‘He hasn’t signed it for whatever reason. Liverpool has become aware of that and stepped in.”

“Once a team like Liverpool comes in for one of your players it is hard to turn that down.”

Liverpool is always interested to sign the players for future. Kaide Gordon will surely be a great addition for future.