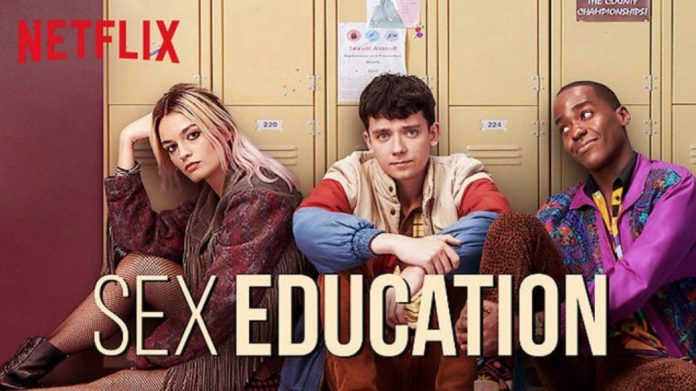 The most desired Web Series Sex Education(Season 3) is on the way to release this year. It’s not quite surprising that to find out that all the people are very excited about one of the best  Netflix shows when the series is one of the best Netflix originals of all the time.

It was very normal that the filming for Sex Education(Season 3) maybe end up for the terrible pandemic, but the filming has already been started in September last year that we are expecting to release in the coming months. Some of the photos have revealed to hold the excitement of this series.

It is expected that the Sex Education (Season 3 ) will be going to release this summer. The filming of this series was started but like the other series, it also had postponed due to the coronavirus. But due to the shot in the longer days of the British Summer, Netflix has taken some important decisions.

Behind the scenes of the sneak peek of the filming process, there are some on-set photos of Ncuti Gatwa(Eric), Patricia Allison(Ola), and other cast members. From this picture maybe you can get a glimpse behind the scenes of filming the shows.

Now Netflix has understood the craziness of the fans for the upcoming episodes, and also the streamer has marked the renewal announcements of the Season 3 episodes. From the season 2’s trailer, we have seen Gillian Anderson delivering a sultry monologue about the benefits of sex ed, the trailer of the season 3 teaser is expressed playfully by Alistair Petrie’s Principle Groff.

The taciturn principal also has seen walking the halls of Moordale High passing the portraits of the main cast of Sex Education as he writes about the future that could hold possibly each of them. This series’s teaser is wrapping up with the invitation to find out more details about it but stops near to the proper release date.

Before the announcements of the renewal of the shows the creator and the writer, Laurie Nunn was already has done some had worked on the script for the upcoming third season. In an interview, Nunn has revealed the tight working schedule for the series.

It is just nothing but the writing of another season before confirming the renewal of how TV production actually works. About the future stories, Nunn said he just loved the writing of these characters. The story is a big ensemble, and he also thought the theme of the show is about sex and relationships.

The season 2 episodes always depict its focus on Otis and instead optioned to borrow almost the same time to the wonderfully diverse characters around him. With the tight-lipped on the season 3 story, it is informed that Butterfield is really very happy with the first episodes and a few things he had added for some change. They are always with him and said that he wants more of Otis and Maeve.

Otis had frustratingly left a drunk love message on Maeve’s answerphone. In the final scenes of season 2, we have seen Otis confession of love to Maeve in a voicemail, but it is deleted before she could hear it. It is expected that there will be more twists in the upcoming season.