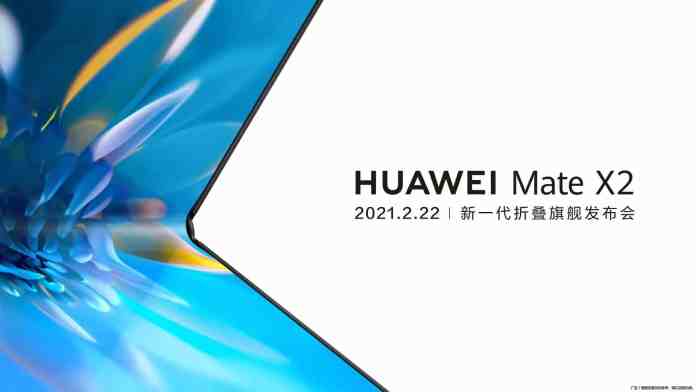 For a couple of days, we’ve been listening to a lot of news regarding Huawei‘s upcoming foldable smartphone, named Huawei Mate X2. Earlier reports that the company will hold a press conference to announce its upcoming Huawei Mate X2 later this month. But today, Huawei has confirmed the launch date of the foldable device that is on February 22, 2021.

Coming to its predecessors, Huawei had launched the Huawei Mate X in 2019 and last year it had launched the Huawei Mate Xs. But those were equipped with an out-folding design which is not in the case of Mate X2 as it is said to get arrived with an in-folding design (as per the launch poster released). Another good thing is that the main design will be different from the Galaxy Z Fold 2 although both are foldable.

As per some rumors out there, the Huawei Mate X2 will run on the Android 10 OS and will be powered by the Kirin 9000 5nm chipset. As it is a foldable device, there will be definitely two displays. One is expected to be 8.01-inch having a resolution of 2480 x 2220 pixels whereas, on the front side, it is expected to be another one with a size of 6.45-inch that delivers a resolution of 2270 x 1160 pixels.

Coming to the camera section, this phone is expected to offer a quad-rear camera setup which includes a 50MP primary sensor along with three other sensors of 16MP, 12MP, and 8MP. For selfies, this phone could arrive with a 16MP selfie snapper at the front. It is said that this phone will have the support for 10x hybrid zoom by its rear camera setup.

Here is a similar product like this one. Samsung Galaxy Z Fold2 5G can be a good choice for you with all kinds of support from Google.