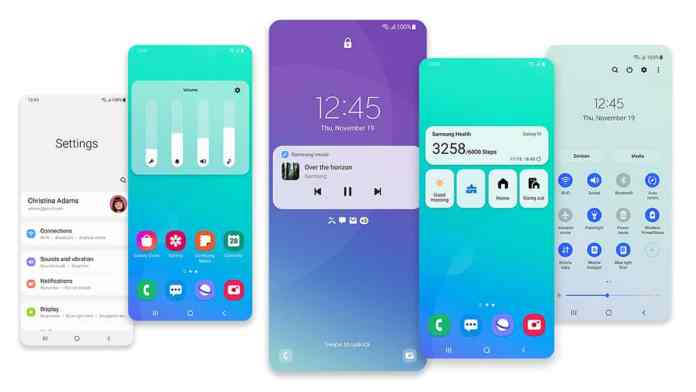 Samsung officially introduces the next version of its own custom skin One UI 3.0 based on Android 11. Yes, it’s the next major update for the Samsung smartphone holders. Earlier, the company opened a beta program for this version that was closed in December last year. The outcome is now public.

Like its track record, Samsung again brings some impressive features that surely melt the user’s heart. The entire design is now more refined and is empowered by enhanced customization. Just go through the content.

The new extended version of One UI is coming with lots of customization options. The first to discuss is text colours. Users can now pic the favourite colour from a large catalogue applied to the button’s texts and icons of the UI. You can see the green places in the image given below.

Most of the visual effects you are familiar with are replaced with better and optimized ones, including the slider bars. The dark mode is more friendly to human eyes in this version. The developers added more new widgets to add on the lock screen, so, read more without opening your Samsung phone’s screen lock. Coming to the widgets for the home screen, there are more customization options you can play with, from reshaping to adjust the transparency, all are possible. The dynamic wallpapers are the bonus in beauty.

The Android 11 has the feature to pin music players above the notification list. On top of that, the One UI 3.0 pushes the chat notifications over the other so that you can easily reach out to your lovable.

If you are a mobile gamer, you probably know how feels when calls and other notifications appear while gaming. Well, now, Samsung also comes up with a solution. The One UI 3.0 blocks the calls and notifications during game time, partially handles the other background processes and memory.

In this section, a lot to say. Starting with the new Gallery App. It stacks all the images that could be your favourite. Most interestingly, the App can repair low-resolution images too, which is stunning. You will get the freedom to access your images anywhere, thanks to the sync feature via Microsoft OneDrive.

The messaging app allows you to send live stickers and embeds Google Duo, just one tap to see your friend. The calling screens are also editable, provide options to add images or videos there.

These are not all. There are more to say –

The new One UI 3.0 could contain more as it’s not landed in the market yet. If you are a Samsung user, I’m sure you are excited to experience the One UI 3.0. Don’t forget to let us know how much you are excited. Visit here to do so.

👉🏽 Samsung Smartphones to Receive this Update the earliest