Samsung Galaxy A52 5G and A32 4G color options leaked 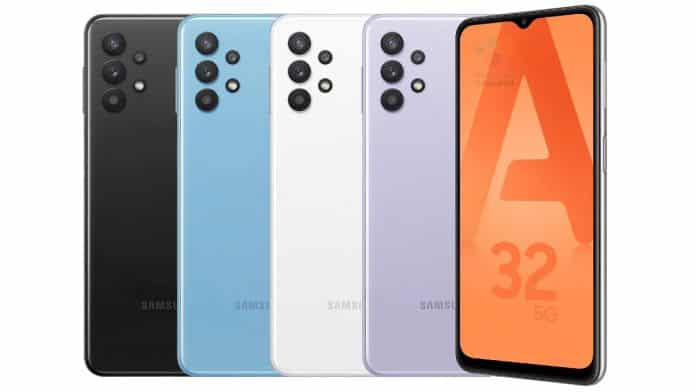 As per reports, Samsung is going to launch its two A-series smartphones in February 2021: Samsung Galaxy A52 5G (4G option will be also available) and Samsung Galaxy A32 4G. Samsung has already unveiled the Galaxy A32 5G a few days ago, the most affordable 5G handset to date. Now, some tipsters have revealed the color variants of both the upcoming phones of Samsung. Let’s quickly check them out.

As per reports, the Samsung Galaxy A52 5G will be available in four different color variants: Awesome Black, Awesome White, Awesome Violet, and Awesome Blue (source).

On the other hand, as per the tipsters, the Samsung Galaxy A32 4G will be available in four different color options: Black, Blue, White, and Lavender (source).

Now, let’s quickly check out the expected specifications of both the devices:

As of now, we don’t have any confirmed specifications of the Galaxy A52 5G. However, some leaks are suggesting that this phone will feature a 6.5-inch Infinity-O display and a thickness of 8.4mm. The 5G variant of this phone is expected to be powered by the Snapdragon 750G chipset whereas the 4G variant could be powered by the Snapdragon 720G chipset. The Galaxy A52 is expected to run on Android 11 OS and probably feature a quad rear camera setup having a 64MP primary sensor. In terms of availability, the Galaxy A52 is expected to arrive in the market before H1 2021 ends at a price tag of under $500.

This device has recently appeared on the TENAA certification website with model number SM-A5260, showing that it will run on Android 11 OS, powered by a 4,500mAH battery, and will flaunt a 6.46-inch FHD+ AMOLED display (source).

As per reports, the Galaxy A32 4G will be powered by the MediaTek Helio G85 SoC paired with 6GB RAM and 128GB internal storage (expected). Regarding the display, this phone will have a 6.5-inch HD+ (720 x 1600 pixels) IPS LCD dewdrop panel.

Coming to its camera section, this phone will offer a quad rear camera setup that includes a 48MP f/1.8 primary sensor along with an 8MP f/2.2 ultra-wide sensor, a 5MP f/2.4 macro, and a 2MP f/2.4 depth sensor. For selfies, this phone will have a 13MP selfie snapper at the front. The Galaxy A32 4G will be fueled up by a big 5,000mAH battery with 15W of fast charging. In terms of connectivity, there will be everything except 5G.