FIFA 21: Is the 87-rated Flashback Cristiano Ronaldo worth doing? 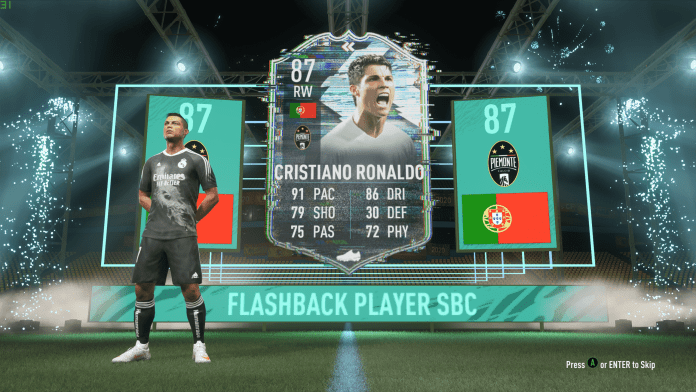 Cristiano Ronaldo’s base Gold card which is 92-rated ST is priced upwards of 1,000,000 FIFA coins. Not many players can afford him, although it is one of the best cards in FIFA 21.

EA Sports has now come up with the Flashback card of Cristiano Ronaldo. It is an 87-rated RW card. It requires 3 teams of 80,84 and 86 overall. The overall cost of the SBC is around 250k FIFA coins.

Despite being an 87-rated card, the stats are quite surprising and suggests that it should have been an 82-84 rated card. The shot rating of 79 is the most shocking. The stat rating has made all the gamer fall in doubt over this card. So, I have completed the SBC and have used him in the FUT Champions. And, now I’ll tell you if it’s worth doing the Flashback SBC.

After you have done the SBC, put a suitable chemistry style. I have used a Maestro on the card as the card has a decent pace but lacks shot and pass.

So, now coming to the main question. How well does the 87-rated Flashback Cristiano Ronaldo card perform in-game?

I would say, don’t go by the numbers on the card. The Flashback card is broken. The shot by which you can score goals is insane. In no way, a player with 79 shot rating could score goals by those terrific shots.

Famous FIFA player and YouTuber Matt HD Gamer has also tested the 87-rated Flashback. The results were amazing for him as well. Check out the video below.

So, the conclusion is getting such a terrific Cristiano Ronaldo card for around 250k is an absolute win-win situation. Just go for the card.