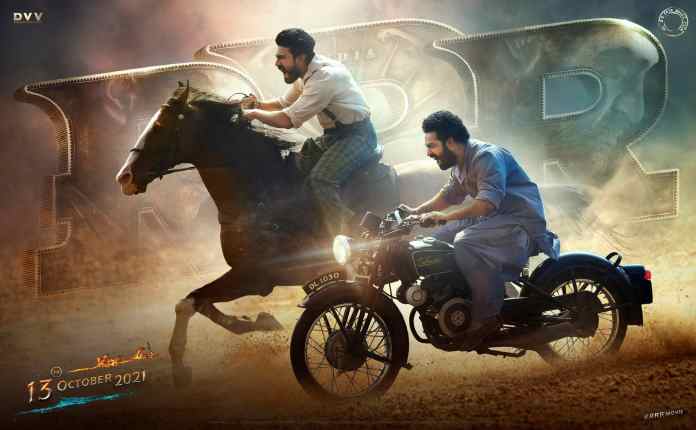 On January 25, the filmmakers of RRR have announced the release date of the film on October 13 worldwide in different languages. Jr NTR and Ram Charan will play the lead role in this drama with them; there also will be Alia Bhatt and Ajay Devgn in an important role. At first, the release date was fixed for January 8, 2021. But due to the pandemic situation, it had postponed.

The director SS Rajamouli has shared a new poster from his official Twitter page with the film’s release date. He wrote that he witness the unstoppable force of fire and water on October 13, 2021. From the latest poster, it is cleared that RRR will release on October 13 this year. With Tamil, Telugu, Hindi, Kannada, and Malayalam, this film is set to release in multiple foreign languages.

The RRR Team also wrote that this October 13, witness Fire and Water came together as a FORCE that had never collaboration in Indian cinema was set to deliver a memorable experience!!! THE RIDE BEGINS.

Besides Indian actors, many foreign actors will also be seen in this movie, like Alison Doody, Ray Stevenson, and Olivia Morris will be seen in some important roles. According to the previous poster, it is assumed that Ray and Olivia will play Mr. and Mrs. Scott’s role in RRR.

Last week accidentally, Alison Doody had announced that RRR would be released on October 8. After sharing the post, she realized the fault and deleted the post before it went viral. But generally, some people had spotted the post already before delete it.