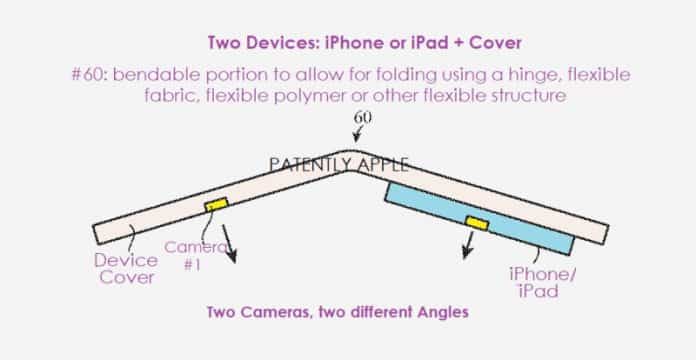 A patent was published by the US Patent and Trademark Office for the US tech giant, Apple. The patent shows that Apple might be thinking to launch iPhones with foldable designs in near future. Foldable smartphones are quickly becoming a new trend in the smartphone industry. And, it seems like Apple doesn’t want to stay behind their competitors anywhere.

Samsung has launched its foldable phones in the market in 2019. Other companies like Xiaomi and Motorola are also in the process of building foldable smartphones.

Also Read: Apple to come with foldable smartphones in near future?

The cameras which we might find in this smartphone will be integrated into different locations. This will help users to have different angles of view. In the patent, the US giant Apple, says that they are aiming to bring a smartphone with a “flexible housing formed from flexible fabric, flexible polymer, or other flexible materials.”

A traditional wide-angle camera capture panoramic shots with huge difficulty. If users try to change the positions of their hands, the photo gets all blurry. Putting camera sensors in different locations will eliminate that shortcoming. That means, with the aid of flexible housing, Apple is trying to offer a better camera experience to its user.

Also Read: Apple might feature an in-display fingerprint scanner in iPhone 13, foldable iPhone in the works

Also, you will be able to capture a composite panoramic image due to the sensors which can be easily panned out. One last thing to notice is that this is just a patent and the real device is yet to be out. There is always a chance that the patent does not actually become a reality or if it does, it comes with a lot of different specs. So, do keep that in your mind.