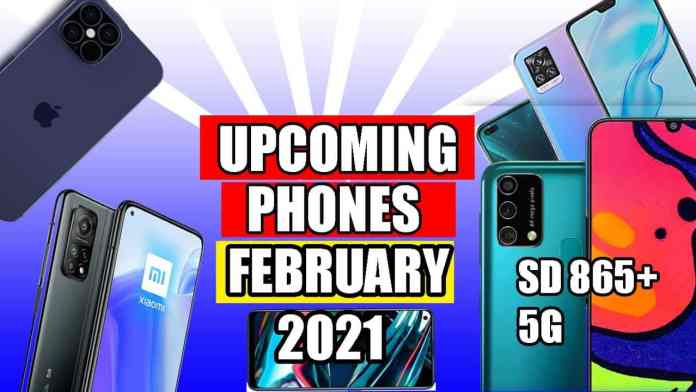 After a devastating 2020, every smartphone manufacturer worldwide is willing to launch as many smartphones as in 2021. We’ve already witnessed some great launches in the smartphone world in January, such as Galaxy S21 series.

Today we’ve brought you a list of six exciting smartphones of different brands expected or confirmed to get launched in India in February 2021. On the other hand, we can expect 5G connectivity to reach India in mid-2021. That’s why most of the upcoming smartphones are expected to be 5G enabled.

Xiaomi is expected to launch two smartphones of the Mi 11 series in India, one is the standard Mi 11 and the other one is the Lite version of the regular model. The Mi 11 Lite is said to slightly cheaper than the standard variant. We can expect that in India, the Mi 11 will carry a price tag around CNY 3,999 (~Rs. 44,999).

To know more: Xiaomi Mi 11 launched in China at CNY 3,999: Is this the most powerful smartphone ever?

Just like the other smartphone manufacturers, Realme has been concentrating on its mid-range 5G smartphones. Keeping this in mind, Realme had already launched the X7 series in China back in September 2020. On the other hand, we recently noticed the lower version of the X7 series got listed on the BIS certifications as well as on the Realme India support page, indicating an imminent Indian launch.

Apart from this, Realme CEO Madhav Sheth started sharing some of the glimpses of the Indian Realme X7 every day. Recently, another leak has come out saying that there is a huge possibility the Realme X7 series is going to launch in India on February 4, 2021, at a price tag of around CNY 1,799 (~Rs. 20,000).

Here are some of the specs of what we can expect from the upcoming Realme X7 series: MediaTek Dimensity 1000+ and the Dimensity 800U chipsets, AMOLED panel, 64MP quad-camera setup, and 65W fast-charging support.

Just after two months after launching the Poco M2, the company had globally launched the Poco M3 in the month of November 2020. After that, in January 2021, the Poco M3 arrived in Indonesia at $129.

Now, some leaks and rumors are indicating that Poco might launch its Poco M3 smartphone in India in the month of February 2021. As of now, the company has not revealed the actual launch date of the device in India. Coming to the pricing, this phone is expected to carry a price tag of around Rs. 11,000.

After releasing the Mi 11 smartphone, Xiaomi is looking to launch the Redmi Note Series in India in February 2021. As of now, we’ve got several leaks about the Redmi Note 10 series and apart from it, it has got listed on several certifications as well.

In all those discussions, a popular Indian tipster has tipped that Redmi is all set to launch its Note 10 and Note 10 Pro smartphone in India in February and another best thing is that Redmi Note 10 and Note 10 Pro are going to be the very-first Redmi Note devices to support 5G connectivity. As per leaks, this series will be powered by the MediaTek Dimensity 5G chipsets.

Most of the smartphone manufacturers have launched at least one of their mid-range 5G smartphones apart from Samsung. But it seems like we don’t have to wait too much for it as a lot of reports have been coming out saying that Samsung is going to launch its very-first 5G enabled mid-range smartphone in India in February 2021, named Samsung Galaxy A52 5G.

The report says that the device is already under production at Samsung’s facility in Greater Noida, India, and also received the Bureau of Indian Standard (BIS) certification. As per some other reports, Samsung is also preparing for its Galaxy A42 and A72 smartphones. As of now, Samsung has not revealed the actual date of launching the Galaxy A52 5G smartphone, but it seems to be very soon.

To know more: Samsung Galaxy A52 5G variant is heading towards India: Report

In September 2020, Chinese company Oppo has launched its F17 series smartphones. After that, a source claimed that the company could skip the launching of the F19 series and could launch the F21 in November 2020. However, Oppo hasn’t launched the F21 series in November. Now, Tushar Mehta, an XDA Developer has revealed that Oppo is planning to launch its F19 series in February.

Tushar Mehta confirmed that Oppo will launch another ‘F’ series smartphone, he hasn’t cleared whether the series will be F19 or F21. He also hasn’t shared any further details regarding the upcoming series.

To know more: Oppo F19/F21 series may launch in February in India