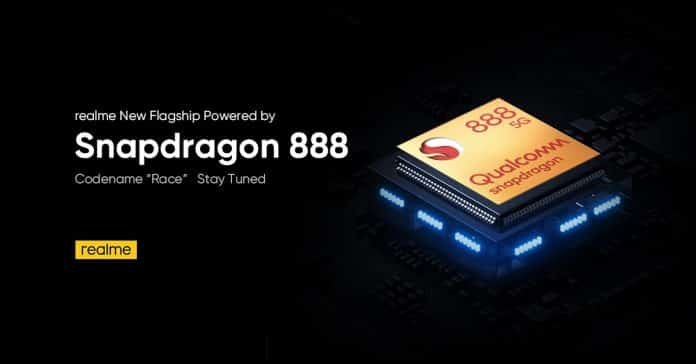 After the launch of the Snapdragon 888 chipset by Qualcomm, Realme had confirmed that the company will launch a flagship smartphone powered by the SD 888 chipset in the first quarter of 2021. Since then, a lot of rumors and reports have been there in the media, saying that the name of the upcoming Realme flagship is codenamed Race and its model number is RMX2202. Recently, Realme president Xu Qi has hinted that Realme Race may get launched in the upcoming month, that is February. The officials have not confirmed the actual release date as of now but mentioned that this phone will get official after the Spring Festival (Feb. 12) of China. So, we can expect the launch date at about the latter half of February.

As per reports, there will be two models of the Realme Race, one is the regular and the other one will be the Pro one. Both the variants are likely to be powered by the Qualcomm Snapdragon 888 processor. For obvious reasons, we’ve not got cleared yet regarding the complete specification of the Realme Race Pro. So, let’s check out what we can expect from the upcoming Realme flagship.

The Realme Race is expected to run the Realme UI 2.0 based Android 11 OS and almost confirmed to be powered by the Qualcomm Snapdragon 888 flagship chipset. This phone is more likely to offer a 6.8-inch QHD+ (1440 x 3200 pixels) OLED panel having a 20:9 aspect ratio and a 160Hz of faster refresh rate.

As of now, it is said that the Realme race will be launched in its home country, No reports about its global launch or specifically, Indian launch. Apart from it, two more Realme devices, named Realme X9 and X9 Pro are gearing up to be launched in Q1 2021 with the latest Dimensity 1200 chipset.