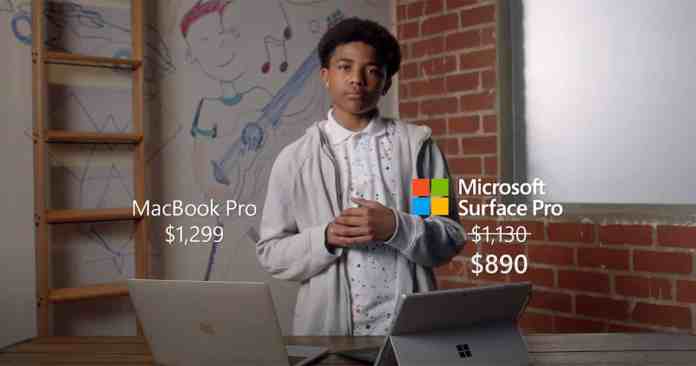 Before entering the month of February, Microsoft wants to overtake Apple’s latest product, the MacBook Pro. This aggressive comparison came in the ad from Microsoft, where it has praised its Surface Pro 7. The software giant stated that the Surface Pro 7 is much better and affordable than the latest machine Apple.

In the 30-second video on YouTube, Microsoft points out the most lacking point of MacBook Pro – the touchscreen or stylus support. It has highlighted the detachable keyboard of Surface Pro 7, which allows effortless portability. Besides these, you can’t ignore the price difference. The MacBook Pro starts at $1,299, while the Microsoft 10 slate starts at $890. Microsoft disabled the comment section to avoid criticism.

Apple MacBook Pro features the in-house 5nm M1 chip. This processor can provide 20-hour battery life, and it is far ahead when comparing the performance. The Surface Pro 7 isn’t good enough like Apple’s device in battery endurance. This chipset of Apple is a performance beast.

When it was tested with Windows 10 through virtualization, even it does reduce the performance of M1, the chipset still able to beat Microsoft Surface Pro X. Surface Pro 7 doesn’t feature any Thunderbolt 3 ports, but featuring this, MacBook Pro will be more portable.

This was not the very first time that Microsoft targets Apple in an ad form. Previously the company had compared Surface Laptop 2 with MacBook Air, claiming that its device is better in performance and battery life.

What do you think about Microsoft’s this approach? Let us know in the comment section.