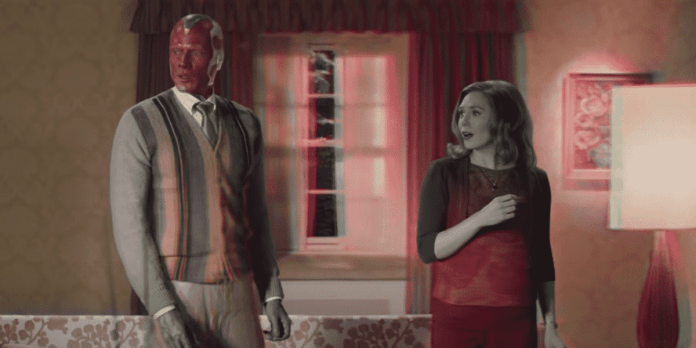 The first Disney plus MCU’s show has a genuine cause to depicts itself after the amazing format. On television, the multicamera sitcom is the oldest pattern. It is very efficient and less costly for the people who make it and also comfortable and very familiar to the audiences.

In the starting Wanda Vision takes the form of a sitcom. The first two episodes of the new series which is premiering are the first Marvel Cinematic Universe TV series made for Disney Plus, the first MCU project after 2019’s Avengers: Endgame.

It seems an odd one that the first image is greeted with two Avengers side characters is reintroduced as a married couple in the black-and-white theme song. He is wearing a dapper suit and she is in a wedding dress and starting their idyllic life.

All the Marvel projects are like to deliver to one genre of entertainment. For example, Ant-Man has the cadence of a heist movie and also the conspiracy thriller Captain America: The Winter Soldier, they mostly serve us incredible action stuff. The first two episodes depict its image of classic homage almost entirely.

In this series, Wanda Maximoff and Vision are a married couple who just shift into a well-to-do suburb. They are trying to hide the fact he is a sort of robot and she holds superpowers. We have seen that Vision invites his boss for a dinner without speaking Wanda.

Suddenly the circumstances become strange. In the second episode, it is depicted that there is also no allusion to Maximoff and Vision’s career as Avengers or anything like previous Marvel movies. Then they are joking about how Wanda and Vision don’t have any marriage anniversary or a favorite song.

According to the comics, there is a lot of strangeness in the upcoming episodes. In the comics, the character Wanda Maximoff is known to manipulate reality. It is assumed that WandaVision might explore that kind of disclosure.

All you need to know about Marvel’s WandaVision