Believe it or not, those are not the shoes you are thinking of 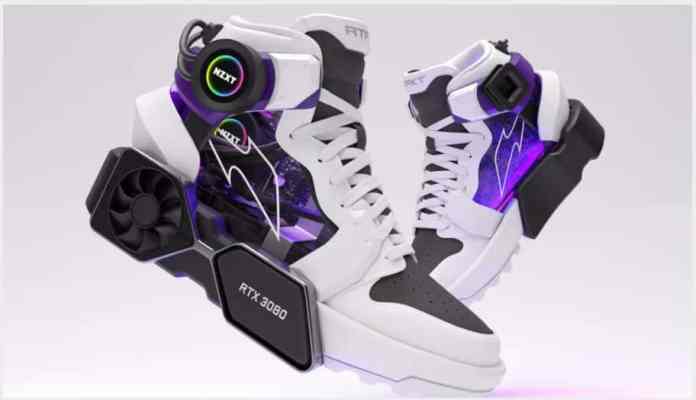 We have seen much crazy stuff happening in the year 2020, and at CES 2021, we witnessed the tech giants bringing forth their most mind-boggling concept inventions to the floor. But today’s news might be the craziest one on the internet.

NZXT is known for making accessories for the PC gaming market, and RTKFT makes “virtual and physical next-gen collectable sneakers for the best esports, gaming, and entertainment celebrities.” But what happens when these two companies decide to come together and create a new product. Well, you get something beneficial, but really weird.

RTFKT teased a new shoe concept on Twitter, and it not only confused us but it to be partner NZXT as well. Even though the latter brand appears on the new shoes. But RTFKT later confirmed that a partnership with the hardware maker is in place, “empowering RTFKT and our creator community to create the future of fashion and collectibles, powering our vision, community, and crazy ideas with their awesome builds and love of gaming.”

If you see the new shoes in the tweet above, then you might be probably confused don’t worry even I was confused the first time I saw them. They look more like a Dragon Ball Z figurine which I have in my closet. But what exactly do they have?

Well as we can see in the tweet, the shoe concept involves an actual RTX 3080 graphics card (which is a fake obviously) and a fake fan attached to the sole, and a battery-powered holographic window revealing all sorts of techno-innards that aren’t there.

The shoes contain such advanced pieces of machinery that it makes you wonder. Are those shoes or not? I don’t believe they are the shoes but if ever they turned out to be one, would you wear them?

Let us know in the comments.