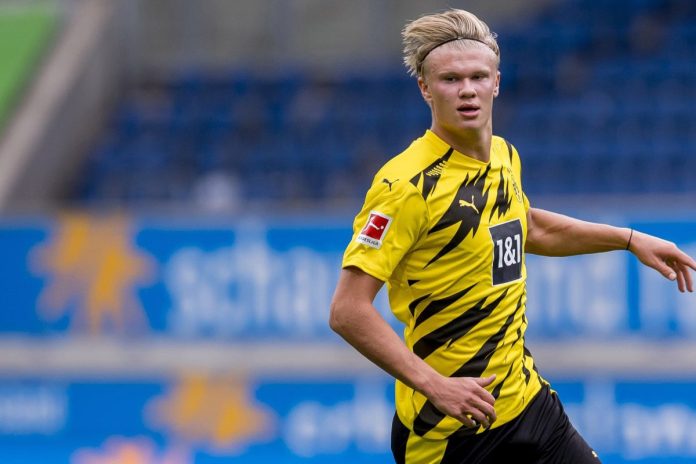 After forking out a record-breaking €80 million for German wonderkid Kai Havertz alone this past summer, Chelsea are willing to smash their transfer fee record once again in an attempt to sign Borussia Dortmund striker Erling Haaland in the summer of 2021.

David Ornstein of the Athletic first spoke about the rumour, saying that the Blues view Haaland as a top priority and are ready to do their best to convince the Golden Boy to join Stamford Bridge at the end of the season.

Having joined Dortmund only a year ago, Erling Haaland has been an unstoppable player and has scored 35 goals in just as many games for the Yellow and Black team. The striker has a release clause worth €75 million that comes into effect with the summer of 2022.

However, Chelsea view the current situation as the best time to possibly capitalise on the financial vulnerability of the other clubs interested in the player. Clubs like Real Madrid, Manchester United and City will all be looking towards the striker’s release clause that comes into effect next year.

The Blues will have to break the bank and offer a record-fee worth more than €90 million to try and convince Dortmund to sell them their best player, according to Ornstein.

While it seems almost set that Olivier Giroud will be departing the club at the end of the current season, Chelsea also have the likes of Timo Werner and Tammy Abraham amongst their ranks. Abraham functions as a classic 9, while Werner often drifts wide and is being deployed as a left-winger by Lampard.

There are speculations that the possible arrival of Haaland could shift Chelsea into a 4-1-2-1-2 formation, with Haaland and, possibly, either one of Werner or Abraham leading the line.

All things considered, the transfer will be very difficult to pull off and only time will tell what truly goes down in the summer.