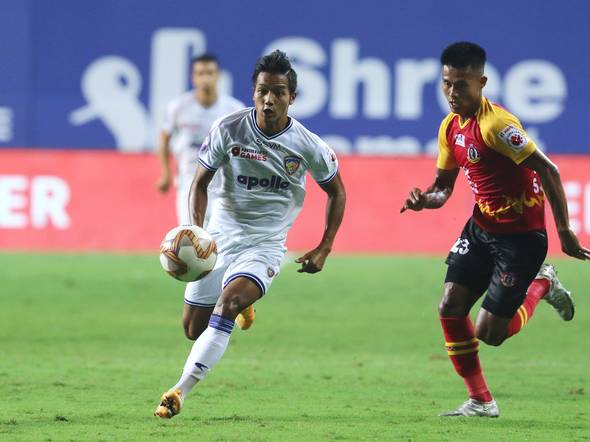 SC East Bengal secured another hard-fought draw against Chennaiyin FC despite playing with 10 men from the 31st minute of the game. The game ended in a goalless draw. Both the teams failed to break the deadlock.

In the 31st minute of the game, SC East Bengal midfielder Ajay Chhetri was sent off after picking up the second yellow. But the Robbie Fowler’s men showed a great response and attitude to secure a point. SC East Bengal goalkeeper Debjit Majumder was excellent throughout the 90 minutes and denied Chennaiyin FC to let one in.

After the match, SC East Bengal boss Robbie Fowler said, “I am delighted with the resilience and attitude of our players. I am massively disappointed with referee’s performance again. We’ve had a lot of injustice again. I’m not saying he (Ajay Chhetri) didn’t deserve to be sent off, but our players were getting kicked left right and centre and the referee didn’t want to put his hand in his pocket for a yellow card. We have good players and the ISL should have good players but when they get kicked they don’t want to come over here because they’re not being looked after. It’s border under disgraceful sometimes,some decisions by the referees. I am mentally exhausted because I am fighting battles with the referees every single game. It’s an absolute joke. We can’t keep doing this.”

Fowler was very disappointed about the red card. He thinks that his team is victimized the most every match day.

“He probably did deserve the second yellow card, but not the first one. It was actually our ball for a throw-in so he was probably not in the wrong frame of mind. We are used to it now because we’ve had no decisions from any referees this year. We play Mumbai City on Friday and we know what to expect. We won’t be getting any decisions again because that’s what it’s like.”- he added.

Chennaiyin FC boss Csaba Laszlo said, “It is so that when you have a one man advantage you don’t always win the game and you saw that today. In our case it was maybe as a bad advantage because I saw the players thought we had already won. It was very bad. I think it was the second worst game until now after our loss to Hyderabad. I am sad because in this case we also had the chances. If we scored 1-0, then the game is done. If they have 10 men they will fight and give everything. It was a good lesson for everybody, that the game is so that you will have to do even more even when you are against 10 men. We did not move much in midfield and lacked ideas and it is not what I wanted from my team.”

SC East Bengal are now 9th in the table with 12 points from first 12 games. They are still 4 points behind top 4.