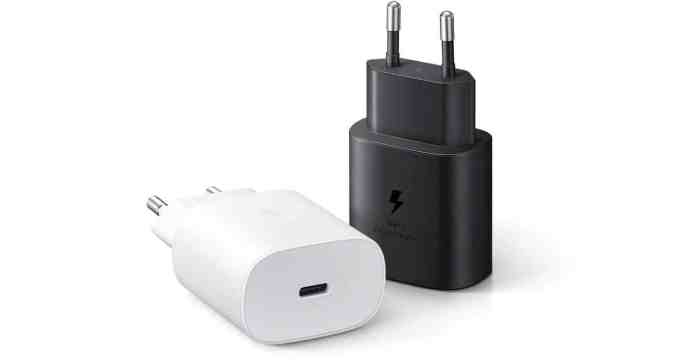 Yesterday, Samsung has launched this year’s flagship lineup, the Samsung Galaxy S21 series and the interesting thing is it comes without a charger. No, this is not an Apple product, this is Samsung, but still no charger this time.

So, it looks like Samsung has started following the footsteps of Apple and Xiaomi by choosing not to put a charging adapter (though it does include a USB cable, unlike the others) inside the retail box of the Galaxy S21 series. To put a smile on the faces of S21 buyers, Samsung has announced a slashed down price for its 25W USB-C Wall Charger.

Originally, the 25W (supports fast charging via USB-C) Wall Charger carries a price tag of $34.99, but Samsung has recently cut down the price to $19.99. But, it seems like you have to wait some more time to buy the 25W charger at $19.99 as Samsung is likely to take some time to finally slash down the price for its users.

However, we don’t have any confirmed information about whether the price cut will happen in other countries and at offline stores and if it will be applicable for Samsung’s wireless chargers.

Also Read: Samsung Galaxy S21 5G series announced globally: All you need to know from specification to pricing and availability

The 25W Wall Charger from Samsung comes in two different color variants: Black and White. It has a USB-C port at the top. Regarding the Galaxy S21 models, all three of them supports a maximum of 25W fast charging. So, if you have one of them and you need a fast charger to charge them, you can make your way to this 25W Wall Charger of Samsung.