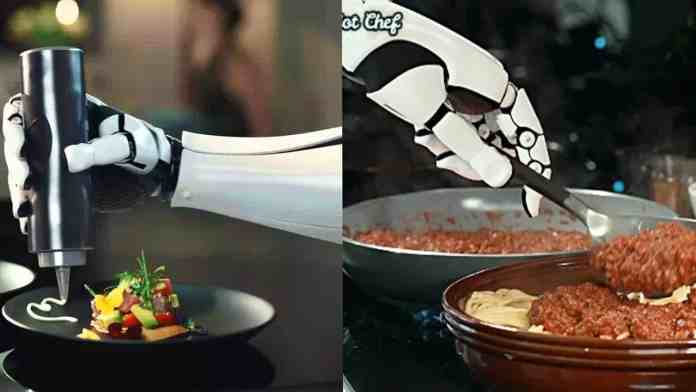 On Jan 12, 2021, the world’s first robotic kitchen was launched at CES 2021 created by British Technology company, Moley Robotics, the system is configured with a dexterous robot integrated into a kitchen, that can make freshly cooked meals at the touch of a button.

The Moley Kitchen is the result of six years of hardworking research and evolution by an international team of 100 engineers of product and luxury interior designers with three award-winning chefs. The new technology has two robotic arms introducing fully articulated ‘hands’, made by the collaboration with world-leading German robotic company SCHUNK., the hand partner of Moley. It is included 11 exhaustive development cycles that can produce movements of the human hands. It means the robot kitchen can bring ingredients from the refrigerator, adjust hob temperature and mix and plate up just like a human cook.

This new robotic kitchen doesn’t cook like a machine- it can capture human skills in motion. The culinary innovator Tim Anderson and the winner of the BBC Master Chef competition(2011) perform an important role in kitchen development, with his 3-D cooking techniques that are recorded and then translated into incredible digital movements by bespoke algorithms.

Chefs Nicole Pisani, Tim Anderson, and Andrew Clarke have made 30 dishes to present the system capacity and added new recipes every month. The customers of this robot kitchen will get over 5000 choices and have the option to include their own family’s favorite dishes.

Operation of the Moley Robotic Kitchen

It can be accessed by both the humans and the robot. Stainless steel and utensils of Bespoke have manufactured a precision as comfortable to fit it in the hands of the robot. It uses optical cameras and sensors to identify the ingredients, utensils, and cookware in the kitchen. It has subtle markers on handles and pan lids that help the robot orientate the stainless steel pots, pans, and utensils. The optical system can mark the dropped food and cleaning up before and after cooking.

There are two options in the kitchen menu one is a smart Internet of Things (IoT) enabled kitchen with or without the integrated robot. It also included an IoT refrigerator and storage facilities that can map the expired ingredients, professional-grade induction hob, oven, and sink. It can easily be updated at the later date.

Mark Oleynik, a  London-based computer scientist, robotics, and healthcare innovator has established The Moley Robotics in 2014. The headquarter is situated in the UK and also has a showroom in Hammersmith, London. As bespoke is the installation, the cost of the Moley Robotic kitchen depends on its specification, but it is comparable to the luxury kitchens.

After revealing its prototype in 2015, it can fetch a huge interest in the hotel, restaurant, and catering industries. The commercial version of this robotic kitchen will be revealed in 2021 to fulfill the demands. The engineers of this robotic kitchen are trying to develop integrated robots for busy kitchens. They mainly focus on reliability and precision accuracy while serving up multiple portions of the freshly cooked cuisine.