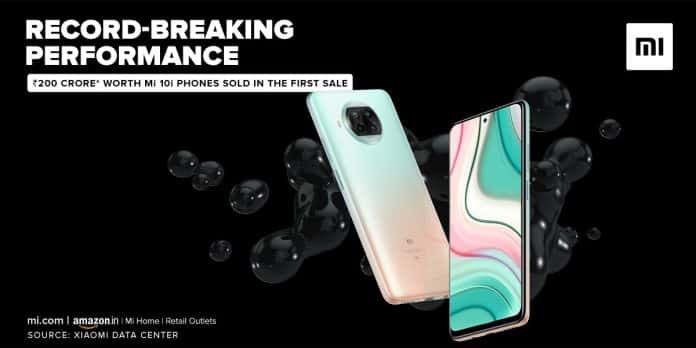 Earlier today Mi India shared a tweet claiming Mi 10i 5G has generated a sale value of Rs.200 crores which are around $27 million in its first open sale in India, across multiple platforms. Now the sale was first to open exclusively for Prime members on Amazon India on 7th January 2021 then on 8th January, the sale started across all Mi India retail channels, including its official website, Mi Homes, and Mi Studios for others. The phone received a massive response from its fans and has reflected the response in terms of the sale value. The reason is detailed at the end of this article so stay with us.

Before knowing how it happened let’s revise its specifications features and detailed pricing. So, the Mi 10i runs the MIUI 12 based on the Android 10 OS and is powered by an octa-core Qualcomm Snapdragon 750G 5G chipset. Coming to the display, this phone features a 6.67-inch full HD+ (1080p) IPS LCD centered hole-punch panel with an adaptive refresh rate of 120 Hz. This phone has glass protection on both of its front and rear panel (Corning Gorilla Glass 5). This phone has a side-mounted fingerprint scanner.

Coming to the battery, this device is fueled up by a big 4820mAh battery with support for 33W fast charging. Xiaomi claims that this phone can charge up to 0-100 in slightly less than an hour and 68 percent in just 30 minutes.

On the basis of its battery, this phone looks slightly heavier as it weighs around 214.5 grams. But the weight distribution makes it feel lighter. Regarding the connectivity, this phone has everything including compatibility with the 5G network. For the ultimate experience of multimedia, this phone offers dual stereo speakers with improved audio performance and apart from it, a 360-degree ambient light sensor is there as well on the device.

Now coming to why, Mi 10i 5G is one of the four 5G smartphones under Rs.30,000 in India among OnePlus Nord 5G, Moto G 5G, and Vivo V20 Pro 5G and one of the cheapest 5G smartphones. If we see from the price point Mi 10i 5G has a base variant with a price tag of Rs.20,999 which is similar to the Moto G 5G, this makes the smartphone the cheapest 5G available in India. Now if we see from the specification and feature point of view, this phone easily matches the OnePlus Nord level performance along with an advanced 108MP primary rear camera which makes it far superior to the other three 5G devices in India. Mi 10i 5G has a very good balance between features and price which makes it one of the most demanding smartphones in India thus breaking all records.