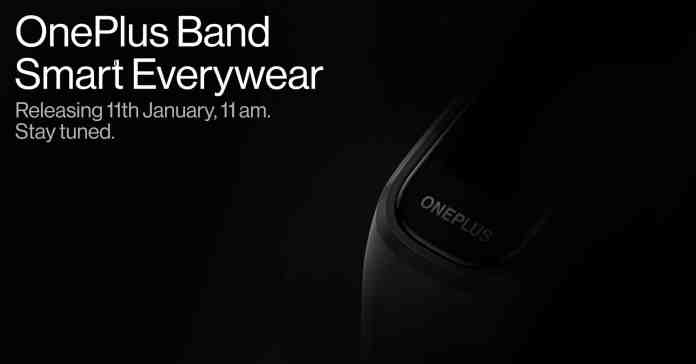 Earlier, OnePlus had recently confirmed and teased about its latest fitness tracker band, named OnePlus Band on which the company was working. But a recent confirmation has come out from the company saying that OnePlus is going to launch the OnePlus Band fitness tracker officially on 11th January. Earlier, a teaser by Amazon has confirmed that this product will be available for purchase only through online retailing platforms. But, in the future, we might see this device offline as well.

A recent leak suggests that this device will feature a 1.1-inch AMOLED display supported by touch input. For the well-being of users’ health, this product is equipped with a real-time heart rate sensor, a SpO2 sensor for blood oxygen level monitoring. There is a sleep monitoring feature as well.

As it is named as a fitness tracker, then there should be something special for the fitness, expected to feature 13 different modes for sports and exercise tracking. For water and dust resistance, this device has an IP68 certification. the battery backup is also decent as OnePlus claims that it can provide 14 days of battery life on a single charge.

Coming to its pricing, the company has not revealed that much about it. Though, it is expected that this fitness product will carry a price tag of ₹2,499 in the Indian market, (approximately $34). In this price range, there are other companies’ devices are there as well, such as Xiaomi, Realme, Honor, and more. So, it will be good to see how they will compete with each other and make the ultimate winner.

Up next: OnePlus 9 Pro to support 45W wireless charging, but the vanilla variant won’t

Carl Pei to reveal his new Brand next week and will also give away 10 MacBook Air computers!