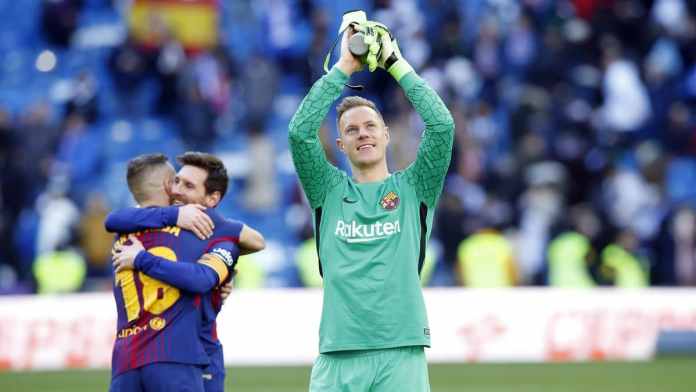 Barcelona’s Marc-Andre ter Stegen has now become the goalkeeper with the fifth-highest number of appearances in the club’s history, making his 250th outing in a Barcelona shirt in the club’s recent 2:3 win against Athletic Bilbao.

He is now only surpassed by Víctor Valdés (535), Andoni Zubizarreta (410), Antoni Ramallets (387) and Salvador Sadurní (332), according to the club’s official website.

Speaking about his achievement, here is what Ter-Stegen had to say:

“I am so happy with this achievement and it is an honour to reach this spectacular number.

“I hope there are many more games to come and that I can keep adding to this tally of matches – I am proud to be among this list.

“The reason I renewed my contract here is because I want to stay and help the club to success.”

The German has become one of Barcelona’s most important players since arriving at the club in 2014 for a fee worth €20 million from Borussia Monchengladbach. He has kept 105 clean sheets for Barcelona in those 250 games, conceding 237 goals in that time.

He is also one of the highest valued goalkeepers in the world right now and recently renewed his contract at Barcelona till 2025. The keeper was also rumoured to have had a massive falling out with club captain Lionel Messi, subsequently putting his plans to have a biopic on hold.

ter Stegen was one of the first to agree to a wage cut with Barcelona’s finances in ruins and will be reimbursed by the club in the future for the current compromise.