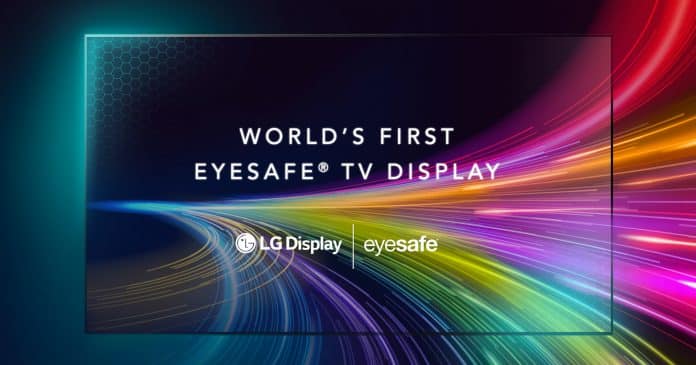 TUV Rheinland conducted the certification for the new 65″ OLED display ushers in a new era of advanced television displays designed for human health. LG Display expects that throughout 2021 many new Eyesafe television displays will arrive in the market, in an effort to communicate health and safety to end-consumers.

The expectation of increased Eyesafe television displays comes in the wake of significant data from across the globe that indicates rising levels of screen time by consumers due to the global pandemic. While the average number of hours spent in front of displays which includes various digital devices has skyrocketed in the U.S. alone, a recent Nielsen report indicates average screen-time exceeds 13 hours a day.

An open letter was issued by the Vision Health Advisory Board commending LG Display and Eyesafe for their leadership in bringing the new display to the marketplace.

“We are so proud to be the first manufacturer to certify our TV displays as Eyesafe® – the recognized leader in screen time safety, blue light mitigation, and optimal color performance across consumer electronics,” commented LG Display Chief Technology Officer Dr. Soo-Young Yoon, according to a CES report. “As an industry leader, we will continue to take proactive steps to provide additional value, such as eye comfort to consumers, as well as providing the best experience through our cutting-edge technology, including OLED.”

“It’s a real honor to partner with an industry leader like LG Display on this project because it has vast implications across the television display industry,” commented Eyesafe CEO Justin Barrett. “Amid the global pandemic, screen time – including use of televisions and electronic devices – continues to increase at a shocking rate, and we believe it is our responsibility to put the health of consumers first; we are proud to introduce these game-changing solutions that protect eyes at the source. We look forward to our continued work with LG Display, as we encourage other major display manufacturers and television brands to adopt Eyesafe® solutions in the near future.”

For the consumer electronics industry, the Eyesafe® Display Standard is the world’s leading set of health-based requirements. It is developed in consultancy with over 250 leading ophthalmologists (a specialist in the diagnosis and treatment of the eye), optometrists (primary health care specialists trained to examine the eyes to detect defects in vision), and engineers who have been conducting and analyzing clinical health and safety research on the impacts of exposure to high-energy blue light. The LG Display television display will receive an AK Certificate (Certificate of Conformance) issued by TUV Rheinland.

“We commend the team at LG Display for this significant milestone,” said Kalyan Varma, Vice President of TUV Rheinland, Business Field Electrical, Global. “Since unveiling the TUV Rheinland Eyesafe® Certification program last year, we have worked with many of the leading computer display manufacturers on adopting the Eyesafe® Display Certification, and we are thrilled to now have the world’s first television display meet these industry-leading standards. We hope to see more television display manufacturers follow suit in the months ahead, as nothing is more important than ensuring consumer eye safety in the display industry.”